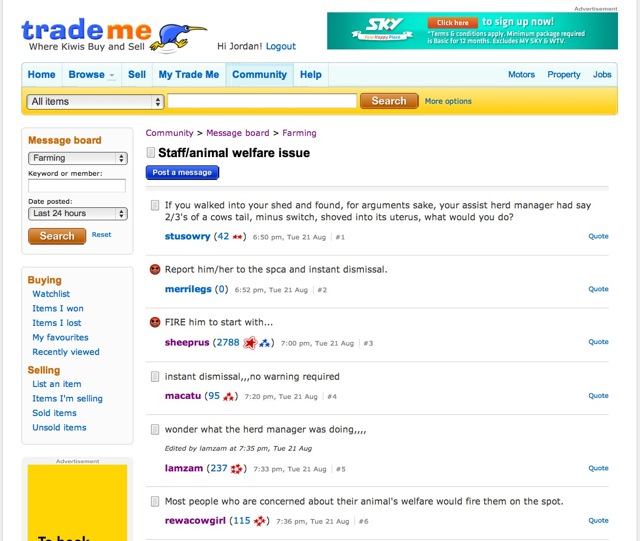 The next comment by "grannypam" mentions a "pacifer", the electric sex toys used to "pacify" female cows through an applied "stimulation" 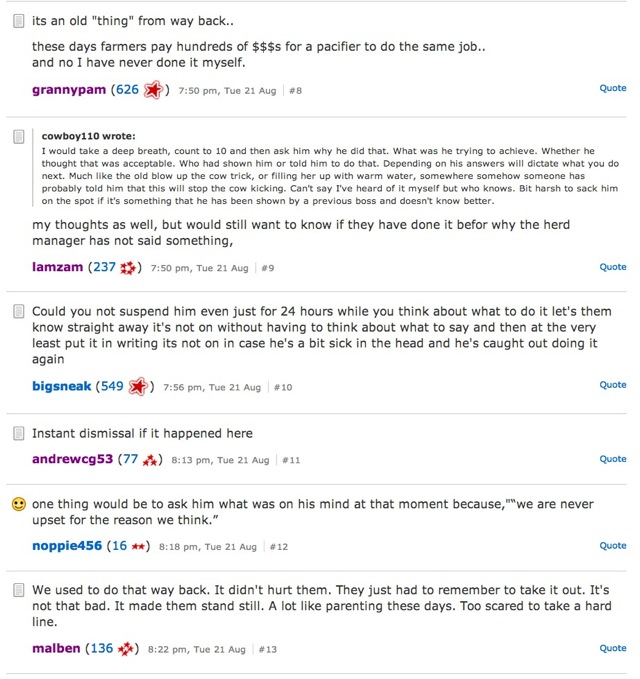 Indeed the New Zealand "Dairy Cattle Code of Welfare" includes advice not to "prod" those sensitive areas. (PDF link).  Yet its business as usual to harm and kill Mother Cow, forcibly impregnate her just to keep her mothers milk flowing, and instantly kill any children found to be male.


Official industry position here in New Zealand and in Australia seems to be moving away from cutting off Cows tails.  Farmers hate them, because these big brave men and women might get flicked with a wet poop covered tail while they suck out her milk.

"A campaign to encourage dairy farmers to adopt alternatives to tail docking has resulted in a significant decline in the practice of tail docking dairy cattle in Australia in recent years. Instead most farms use alternatives such as switch trimming (the removal of hair at the end of the tail), effective dairy design, fly control programs and practices that enhance cow and operator comfort. "

Wait, farmers who take away milk from her body are now called "operators" in industry speak?  What are they, driving a forklift??? 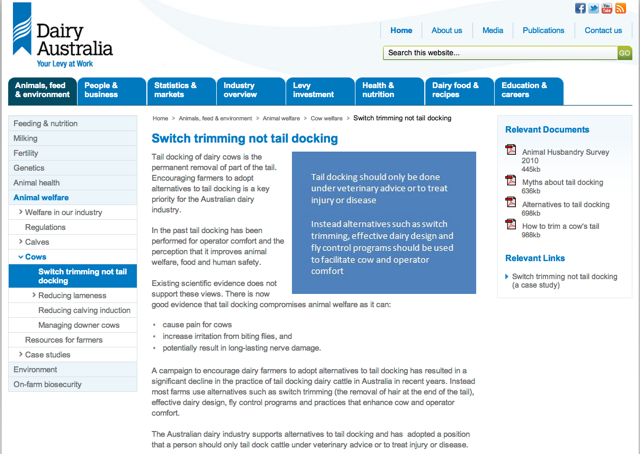 "Dairy" is big business in Australia, and is New Zealands largest industry.  Nothing like "old McDonald had a farmer" like we're all taught by childrens books!

"...For example, the picture book, Stories from Mudpuddle Farm (Morpurgo and Rayner 1994), written for children ‘who are just beginning to enjoy reading’, introduces readers to Jigger, the ‘almost-always-sensible’ sheepdog, Mossop the cat, Captain the horse, Frederick the cockerel, Farmer Rafferty, Penelope the hen, Upside and Down the ducks, and Auntie Grace and Primrose the dairy cows.  Farmer Rafferty himself is described as ‘usually a kind man with smiling eyes’ (ibid.: 11) who evidently enjoys a friendly social contract and a constructive working relationship with all the other animals.  In Mudpuddle Farm, each and everyone has a job to do and old-smiley Rafferty tells the various animals: ‘You look after me, and I’ll look after you’ (ibid).  Many of the nonhumans are shown living happily in their family groups, looking after their offspring, another common theme in such publications.

The cosy consensus is maintained as the entirely free-range hens agree to lay eggs for the farmer, while the ever-smiling cows ‘let down their milk for him’ (ibid.: 13).[15]  However, if readers were in any doubt, a few pages on they learn that the human animal is actually a little more equal than the others when Farmer Rafferty loses his temper after finding mice on the farm.  He asks after the whereabouts of the cat in ‘a nasty raspy voice’ he kept for ‘special occasions’ (ibid.: 20).
The simplest books about animals, such as the Ladybird ‘toddler talkabout’ series, often appear designed to encourage children to count and make approximate noises of different types of nonhuman animal.  In I Like Farm Animals (Ladybird 1998) a farm is depicted complete with the seemingly obligatory smiling animal enslaver and the happily grinning animals.  All the various animals are pictured together, often with their young; with not a single cage in sight.[16]  In fact, readers are told that the different animals have their own ‘homes’ in which they live.  Of course, few would ever expect to see a single battery hen cage, or a veal crate for calves, or a pig farrowing crate in these publications for the very young, yet to talk of such animals having ‘homes’ is nothing less than highly misleading.
Books for slightly older children predictably have more complicated narratives.  For example, in Nubbins and the Tractor (Sinnickson 1980), the horse in the story is presented as human property, which correspondents with the actual status of most horses.  Indeed, when the animal is threatened with being replaced by a newly-purchased tractor, his salvation is based on the possible transfer of his ‘ownership’ from farmer to son.  The boy learns that his father is intent on selling the newly-redundant horse and appeals to him: ‘Don’t sell Old Nubbins!’  Although the boy declares that he and Nubbins are ‘friends’, he demands ownership of the horse: ‘Give him to me, and he and I will help you with the work’.  When the new tractor breaks down, Nubbins is shown to be quite over the moon at the prospect of being strapped back into his old harness and he blissfully sets off for a day of ‘hard work’.  Eventually the boy gets the official ownership of the horse and the book ends with both owner and owned pictured apparently deliriously happy about their master-slave relationship.[17]
If parents want a break from book reading, they can purchase children’s videos such as ‘Fourways Farm’, made in 1997 for Channel 4 Television and narrated by popular actor and radio personality Martin Jarvis.  Here, in several stories written for children up to seven years of age, another community of co-operative animals are to be found.  All co-operative with the exception of three ‘bad rats’ who are stereotypically depicted as scheming ‘gangsters’ who ideologically declare: ‘We don’t do nice things, we’re rats’.  However, all the other residents are demonstrably ‘nice’; the cow, the horse, the duck, the dog, the cat and (another stereotype and slightly less than nice) the typically ‘greedy pig’.  All the animals, the title song tells viewers, ‘say hello to the morning sun’, and they all have ‘food to eat’.  In Fourways

I'll stick to the soymilk thanks!  No shoving of tails up *HER* "uterus" there!
Posted by JayWontdart at 7:23 PM