Welcome to the third episode of Coexisting With Nonhuman Animals.

I'd like to say a very big hello to Barbara, of Veganacious . Barbara sent me an email thanking me for my other podcast. I've thanked Barbara for the articles she posts online. You can find her on twitter under the username Veganacious or at veganacious .com .


This episode, that I've called "strife after death", I'd like to talk about how we use dead animals in somewhat unusual ways. We all know how meat comes from the Beef Tree, requiring only sunlight and five hugs a day to produce steak, but do you know whats really in normal petfood?

My first story is from New Zealand. It pretty much speaks for itself, a very small rural town, where killing animals is celebrated.

I've turned 22 today, 24th of October. Thank you to Bea Elliot for sending this my way :) 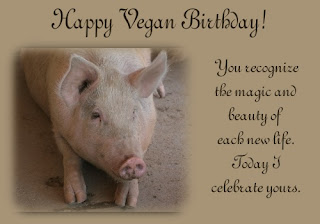 Posted by JayWontdart at 2:14 PM 2 comments:

Should have my first real episode up soon :)

In the mean time, I have direct download links to my previous animal rights/vegan episodes on the right.

Thank you for your patience :)

Posted by JayWontdart at 10:04 PM No comments:

I sent a letter to The Southland Times, about the transplant of pig organs into humans. The local coverage of the issue had been one sided, that having this pig farm in our region, we would be gaining an enormous amount of wealth, as the pigs were mysteriously turned into a life saving (for human animals!) product, trademarked as "Diabecell"

First my letter that was published, then the company reply. I'd love to know what you think!


What happens to the diabetes pigs?

"I would like to know the actual plan when it comes to using pigs for organ transplant. I've asked both the mayor and Living Cell Technologies to be honest about what their procedures involve.
How I understood the mayor's last article, investors are being asked to spend $3 billion on a factory farm.
From what I understand of the process – admittedly very little – the pigs will be monitored in a sterile cell block, kept alive for their organs and blood? Will it be like in The Matrix: bodies encased in a pink slime, tubes every which way? Who knows?
And for this, these poor pigs will find themselves being trademarked as "Diabecell". What is that exactly? Is it an organ attached to a person? A series of injections?
I would genuinely like to be informed.
Can't we return these poor pigs back to their lovely remote holiday home on the Auckland Islands to live their lives free of mad science? Or will the dollar signs win out? Jordan Wyatt, Invercargill"


"Living Cell Technologies chief executive Paul Tan replies:
Living Cell Technologies (LCT) is breeding pigs in special facilities in Invercargill. The intention is to use pig tissue to treat human diseases rather than as a source of food.
No experiments are conducted on the pigs. They are housed in environmentally controlled facilities that give them a very comfortable existence and protect them from the viruses that modern pig herds have. They each have their own pen, which is a large area so that the pig can move around and lie out full length in any direction. They are let out of their pens twice a day for their exercise, to play and socialise with the other pigs. The pigs are given toys and the staff spend time grooming, bathing and giving attention.
The pancreas of young piglets are taken to obtain cells that produce insulin. The piglets are anaesthetised for the pancreas to be removed and they are then humanely euthanized while still under anaesthesia. In a separate manufacturing unit the cells are processed into gel capsules and the product, Diabecell (registered trade mark), can be implanted into the abdomen of someone with type-1 diabetes. In this form of diabetes, the insulin producing cells of the pancreas have been destroyed and the person becomes insulin deficient. It is treated with lifesaving insulin injections but this still causes life threatening swings in blood glucose levels. The implanted pig cells produce insulin when blood glucose is high and switch off when blood glucose returns to normal.

Pigs are used because pig insulin is very similar to human insulin. Prior to genetically modified human insulin becoming today's standard treatment, pig insulin was routinely used to treat human diabetes for many decades.
The pigs were left on the Auckland Islands by sailors as a food source. DOC would like to remove all the pigs from the Auckland Islands to protect the plant and birdlife there.
By breeding these unique pigs in comfortable conditions not only are we preserving the breed, their tissues are used to save human lives.
We are aware that Southland has an active social and economic development programme and our company is pleased to be part of its progress."