Bluff with Justin of Hellhound Hotdogs and Dan

Last day of our adventures with Australian friend Justin of Hellhound Hotdogs. 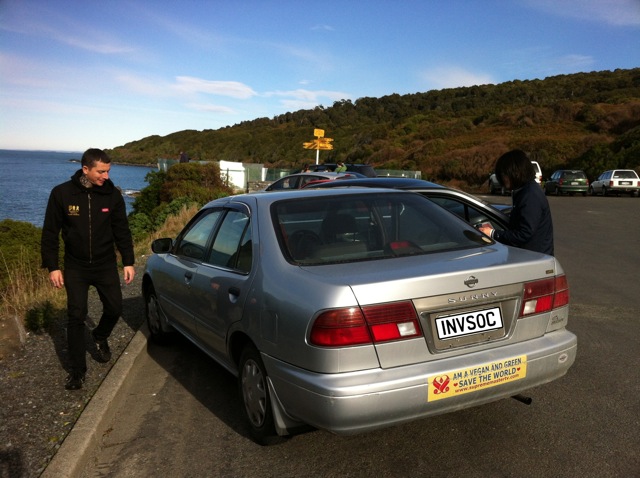 Dan, the first other Vegan I'd ever met in person, the second Vegan living in Invercargill (that I know of), and its all because of that great bumper sticker  :-) 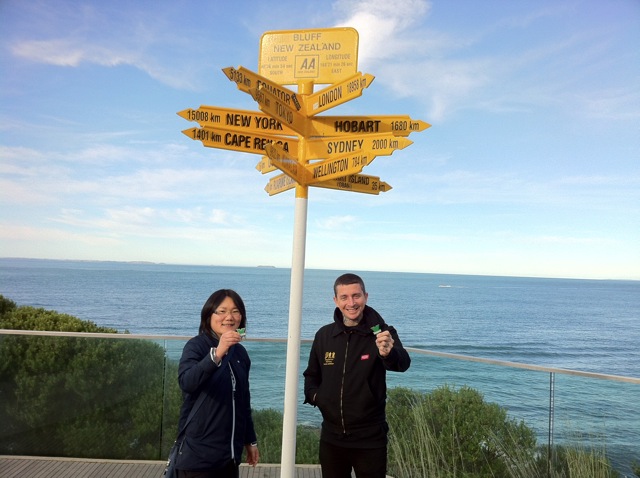 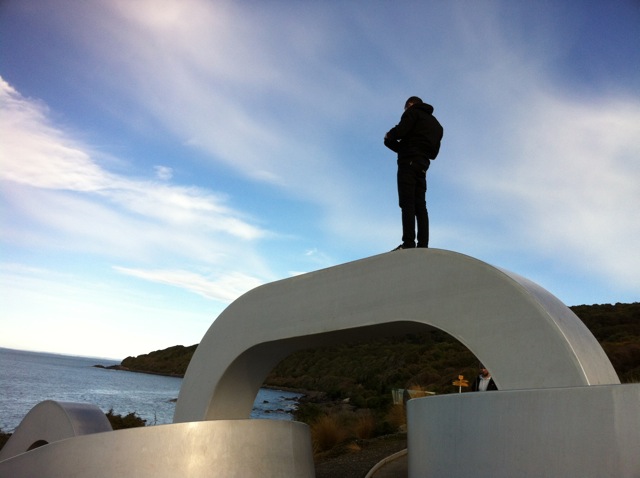 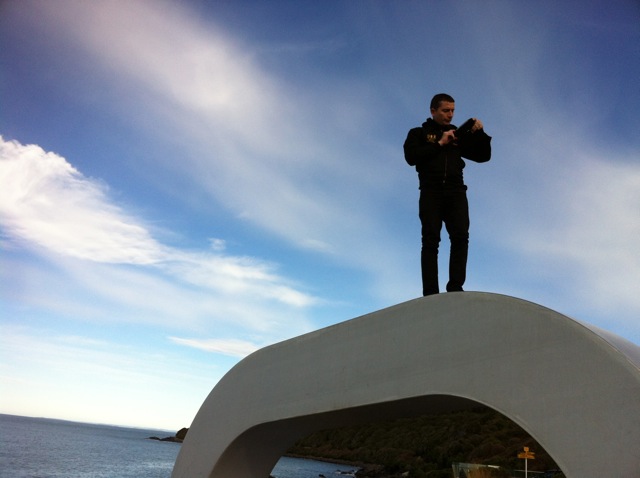 Theres a second anchor chain on Rakiura (Stewart Island), third main (yet tiny!) island of New Zealand, as shown on this website

View Larger Map
Bluff Hill on left, the road goes to the lookout seen in the below photo.  To the right, you'll see the last Highway 1 red icon at the Lands End/Sterling Point famous roadsign showing distances to overseas cities. 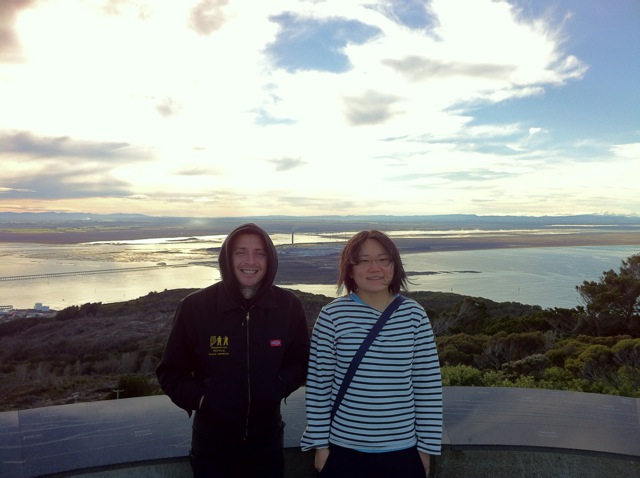 with the Tiwai point Aluminium Smelter in the background, New Zealands largest user of electricity, generated at the fantastic Manapouri Hydroelectric Power Station.  Australian Bauxite Ore is shipped to Bluff, New Zealand to be made into long silver ingots, which then go to Japan for manufacture.  Aluminium refined by local New Zealanders is used on the wings of the Airbus A380.


A little bit about New Zealands GLORIOUS (sarcasm) history of killing Whales and Seals on the way up to the lookout: 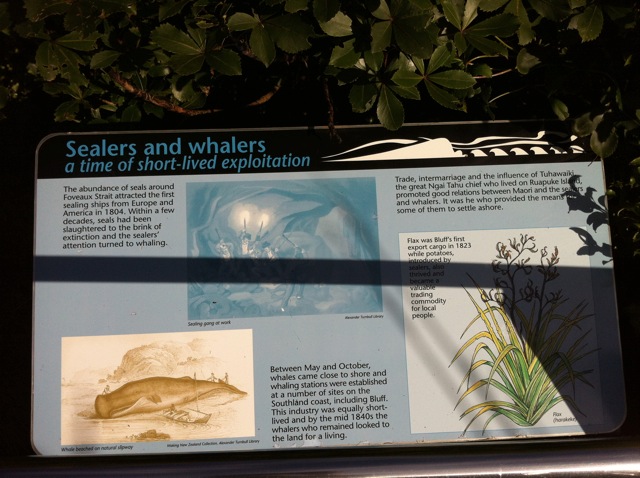 Heres to ALL of Non Veganism being "short lived exploitation".  Look at those violentmen in their suits as they bash seals to death, the "dairy"/sheep farming of our past. 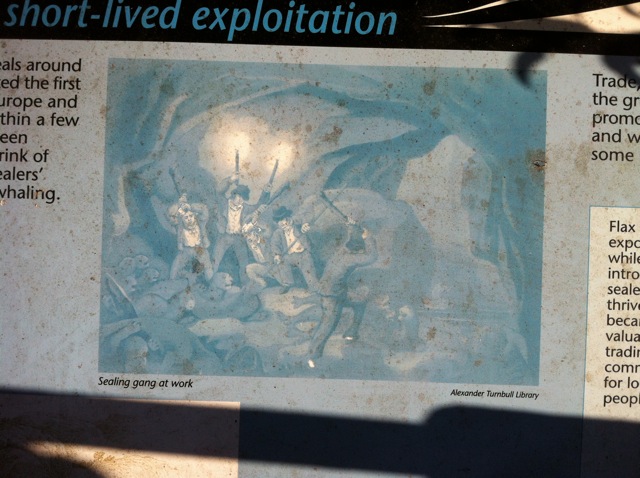 World War II bunkers found at a short (but steep!) walkway from the road sign, heading partly up the vast Bluff Hill.  This first underground fort is small compared to the second 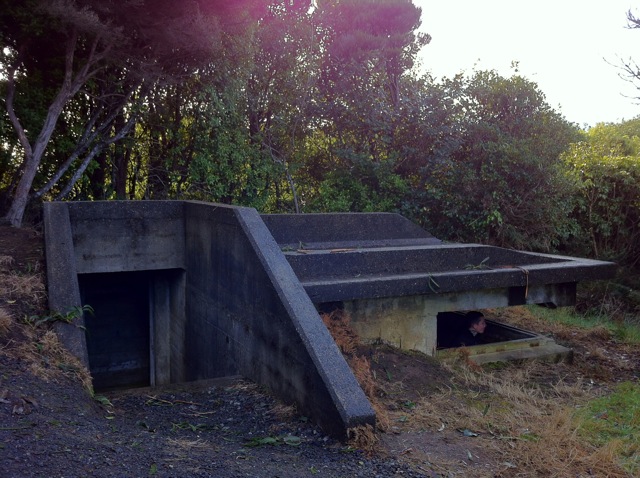 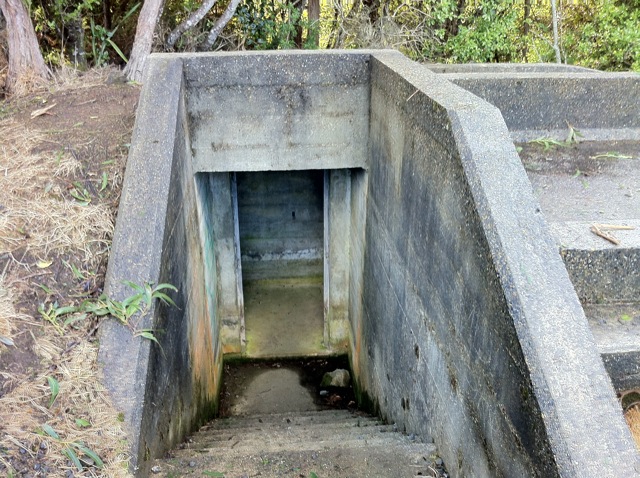 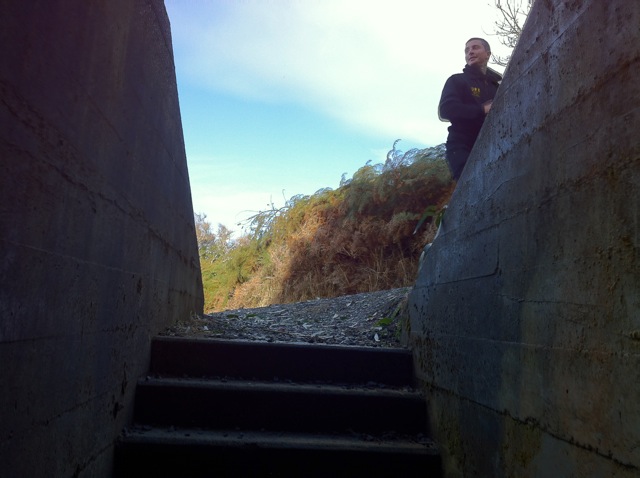 HUGE, with a glorious view!  Out the back is a tomb like dark room for supplies.

Information on the Dog Island lighthouse. 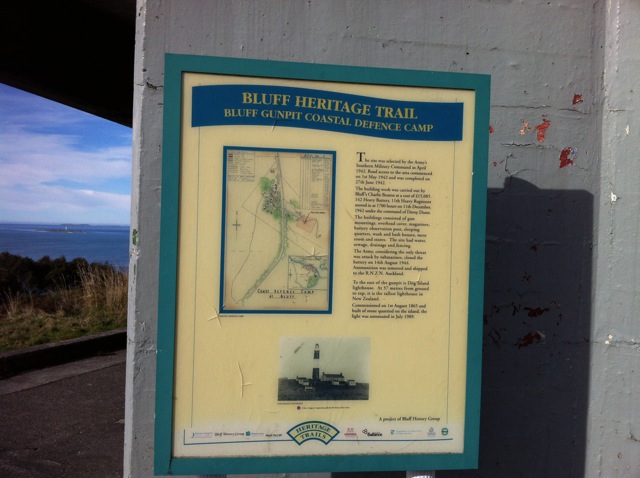 What a great place to have our potlucks, only a twenty minute drive to Bluff, then a 10 minute steep trail walk.  Imagine this view glassed in as a nice balcony 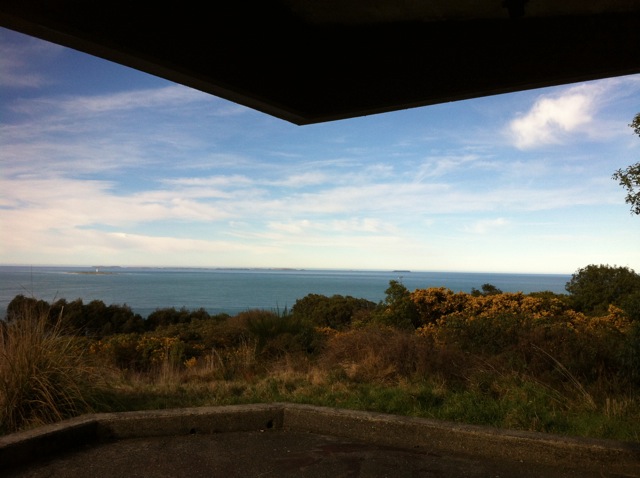 But we'd have to look out for that "LIEN" Jess character! 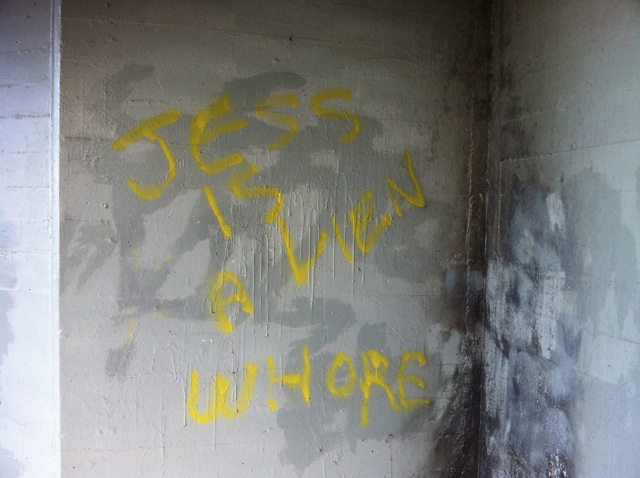 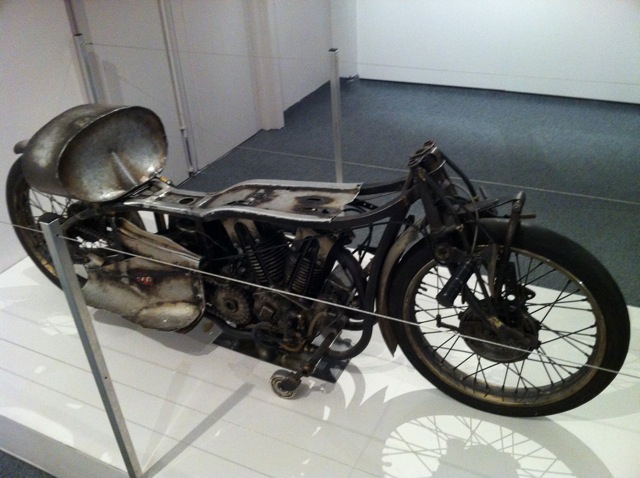 On the New Zealand release DVD of Worlds Fastest Indian, theres an unskippable trailer for Southland that you're forced to endure before the movie begins.  I uploaded a copy to YouTube, some beautiful scenery that strobes past your eyes, along with a strained vocal electronic dance beat!  "Southland, because life should be beautiful!"


At Southland Museum back in Invercargill, the giant white pyramid in Queens Park

We learn about our Subantarctic Islands, such as the Auckland Islands where I applied for Department of Conservation volunteer work to check on the island's state.  This is where the "Auckland Island Pigs" are from, who "had" to be exterminated for being "introduced species" in recent years.  We human animals had let them loose on these picturesque islands at the bottom of the world, but they had to go, "they eat native birds eggs and native plants!".

A few were kept for Xenotransplantation experiments, as they are "disease free", with few day old males brought into this world at an entirely sterile breeding facility near Invercargill, killed for their pancreas which is used for a human diabetes treatment.

There were also sheep on the islands, who were also "taken care of" 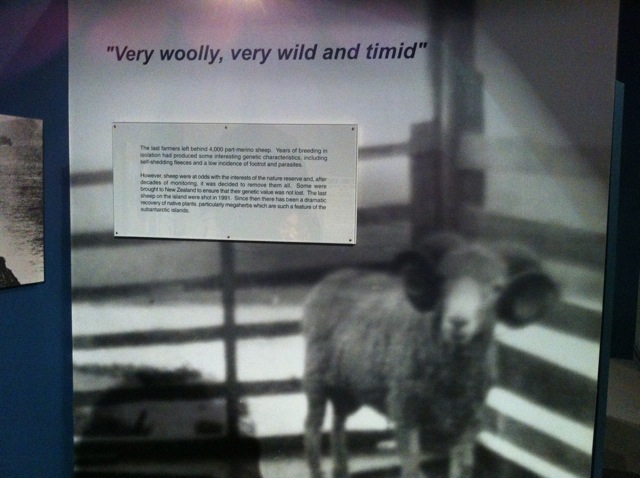 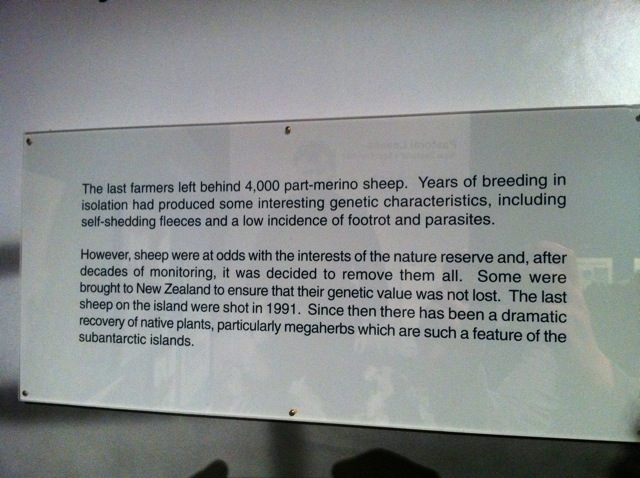 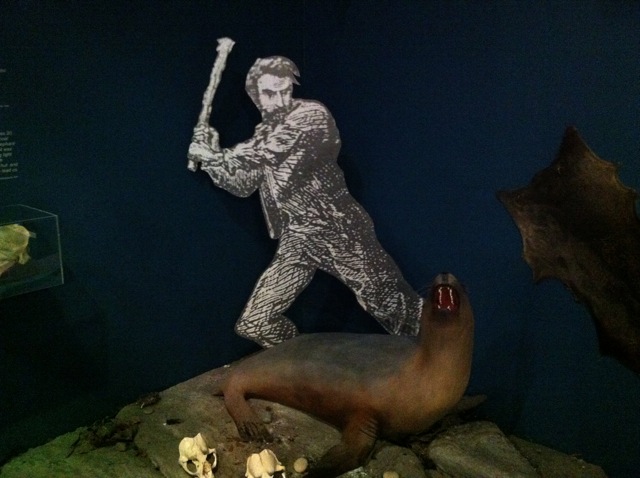 Tuatara, rare lizards who live practically forever, barely moving, rarely even blinking or breathing are kept alive in the Museum.  Shown below is Henry, who became a father at over a hundred years old.  Its very sad to see such beautiful animals kept behind glass all their lives.  Theres an X Ray of "Mildred" from 1917, a female who is apparently still alive today as the most recent baby Tuatara were made by her and Henry. 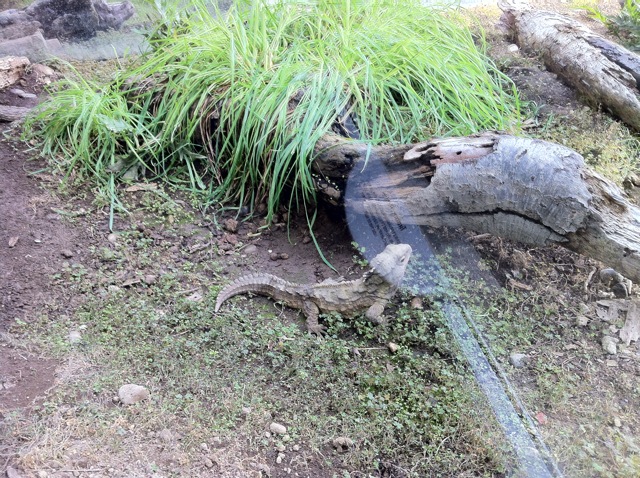 Reptiles and Birds are closely related, Chickens are modern ancestors of the Dinosaurs! :-) 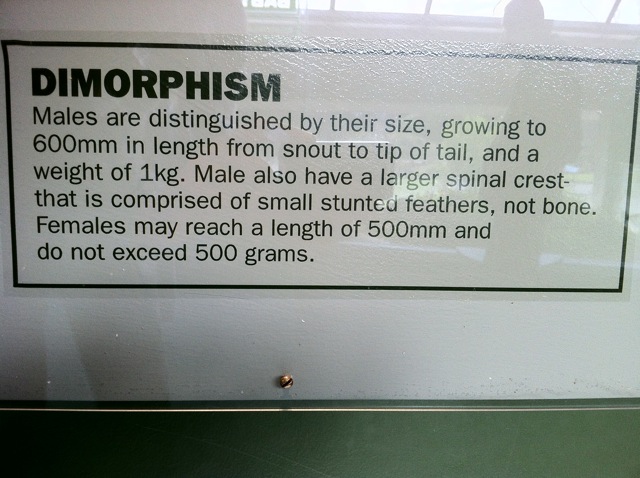 We also briefly visited the Aviary, which always makes me sad, to see the birds kept caged in.  Here is a Kaka, a wonderful native parrot with a fantastic beak.  Kaka are related to the mountain parrot Kea, who are terribly destructive with their beaks, pulling off car aerials of tourists, ripping rubber linings around windscreens and pulling off windscreen wipers.  Kea (and no doubt Kaka!) are very intelligent, and we keep them caged at our aviary along with all the other clever, curious and beautiful birds.


I hope you enjoyed your brief visit to Invercargill, New Zealand Justin, thank you for being tour manager of "Men in Tutus", and thank you for showing us how to make Hotdogs, Hellhound style! :-)


Day One INVSOC Potluck with Justin of Hellhound Hotdogs

Day Three Trip to Bluff with Justin, Dan
Posted by JayWontdart at 10:13 PM