Episode 61 Auckland Antics
Meeting other longtime Vegan (online) friends Emmy James, Elizabeth Collins and William Paul in person, the National Animal Rights Conference 2011, the big lights of Auckland, New Zealand, population 1.3 million (in a country of FOUR million), which has just a few more Vegans than Invercargill, New Zealand, population 50,000 :-)
Listen now by downloading directly from here or, better yet, subscribe in iTunes to get each episode automagically!
Coexisting With Nonhuman Animals iTunes link
http://itunes.apple.com/nz/podcast/coexisting-with-nonhuman-animals/id334206335
Hello and welcome to another fine episode of Coexisting With Nonhuman Animals, the premier show of the Invercargill Vegan Society, coming to you from Invercargill, New Zealand, bottom of the world, and quite possibly the southernmost Vegan society in the entire world.
This episode, I'd like to play my diary entries, recorded in audio form, from a recent trip to Auckland, the near top of New Zealands North Island.  And yes, the North Island is physically "up", further north, than the South Island on which I live at.
I flew 1100 kilometers to attend the National Animal Rights Conference 2011, but, more importantly, to meet many Vegan friends in person, including Emmy James, William Paul, and Elizabeth Collins, of NZ Vegan Podcast.
In fact, in the case of Elizabeth, I even got a hug
Here are my dairy entries, recorded in a tiny hotel room late at night, by the way, during the end of the first recording, I realized how paper thin the walls were, that I DIDNT want to bad mouth the hotel with management possibly listening….recording these, I was no doubt keeping the entire floor awake, just as bad as the huge fat guy next door watching bad sci fi on his laptop, "…the year is 3069, all the men have died…except for one nerdy gentleman who has his pick of all Earths most beautiful ladies, on the condition he repopulate the planet….",
oh, and the woman literally metres away from my room, who had a huge fight on the phone the first night, using the Eff Word literally a hundred times, I heard a snippet "…the last thing I remember…is you hitting my head against…." and that when the phone call was over, I didn't go over and offer help because she apparently had a "friend" staying with her, the very next night… I found out her "female friend" was a little more than just a friend, as they became very…intimate…and vocal….with one of the drunken lesbians slurring to the shower "babe…illgettabottleawine and shagyaallnight…."
Yes, fun times in Auckland,  New Zealand, and with that mental image, may I present to you a series of recordings featuring a strange young man talking into an iPhone headset late at night, in a very small, lime green, white and purple painted hotel room
Read more »
Posted by JayWontdart at 9:40 PM 1 comment:

Photos from my trip to Auckland

Photos from my trip to Auckland

Posted by JayWontdart at 3:03 PM No comments:

While visiting some city recently, I managed to meet Elizabeth Collins of NZ Vegan Podcast

Posted by JayWontdart at 9:44 PM No comments:

Episode 60 Only Vegan in the Village

Episode 60 Only Vegan In The Village
The only Vegan in Invercargill….well, not quite…Keeping Mothers Trapped in Cages, "they love it, eating and nursing their children is ALL they do!" and preparations for the National Animal Rights Conference 2011 :-)
Listen now by downloading directly from here or, better yet, subscribe in iTunes to get each episode automagically!
Coexisting With Nonhuman Animals iTunes link
http://itunes.apple.com/nz/podcast/coexisting-with-nonhuman-animals/id334206335
Hello and welcome to another fine episode of Coexisting With Nonhuman Animals, number 60 in fact, a special episode indeed!
This will be the last episode I record before boarding a plane from Invercargill to Christchurch, halfway up the South Island of New Zealand, then a further plane to Auckland, for the National Animal Rights Conference 2011!  I'm very excited, I'll be able to meet all the Vegan friends I've made online, such as Elizabeth Collins of NZ Vegan Podcast, William Paul and Emmy James.  Oh, and theres some three day thing as well, bunch of people speaking, free food already included in the ticket price, but it FEELS free at the time, thats what matters!
Heres an announcement about the Conference on the Wellington based radio show Animal Rights and Wrongs:
It worked for me, I'm going up on the 20th of this month, a few days now :-)
Ok, so this episode isn't THAT special, I just have a few clips to share, nothing big.
I noticed the "This Is My Next" podcast mentioned Veganism, this is a general tech show, surely listened to by hundreds of thousands, its great that they KNOW what Vegan means, and that they'd we'd effectively get a little bit of advertising, although there was an assumption that these "Vegan marshmallows" would be gross without all those yummy bits of skin and hooves we all crave
I was really surprised to hear the V word in one of the Non Animal Rights shows I subscribe to, just shows we're growing as a movement!
I also listened to the audiobook version of 1984, this is from near the end,
Read more »
Posted by JayWontdart at 9:14 PM 1 comment:

Hell Pizza "Sinister", a Vegan pizza and FEATURED as Vegan!

Hell Pizza is a New Zealand wide chain (apparently taking on The Rest Of The World) known for "in your face" marketing, just the use of the HELL theme is enough to get New Zealands (admittedly small) Whiny Christian Groups (not all Christians are whiny) complaining (Whiny Christian Groups, email me, satan@jesussayseatfish.org.hell ) "oh, it encourages people that hell is a nice place, with cartoon demons showing their boobs..."

While I'd personally not see the objectification of female demons while I order fast food, I thought I should FINALLY order a "Sinister", the all Vegan pizza thats actually featured as such! A couple other Pizzas have a "V" for Vegetarian next to them, whatever "Vegetarian" might mean, the "Sinister" literally has a "VEGAN" next to the name in fairly large letters! ALL RIGHT!

Veganism is mainstream, the term appears in a fast food menu! :-)

Starring Refried Beans, Avocado, Onions, Salsa, Tomatoes, Jalpeno Peppers and Capsicum, with the added note of "comes without cheese", I give the Sinister high marks!

Now to get rid of all the Non Vegan items, the television ads that have cartoon lambs frolicking about (seen or unseen), later heard "fried alive" and offered "available now at Hell Pizza!"....

Episode 59 Stephen Fry and The Goode Family
Atlas Shrugged starring Sociologists and sinful Soybeans….Stephen Fry in BOTH my city of Invercargill, NZ and some "America" outfit, King of the Hill, The Simpsons, The Goode Family - bringing Veganism into mainstream cartoons :-)

Listen now by downloading directly from here or, better yet, subscribe in iTunes to get each episode automagically!
Coexisting With Nonhuman Animals iTunes link
http://itunes.apple.com/nz/podcast/coexisting-with-nonhuman-animals/id334206335
Hello and welcome to another fine episode of Coexisting With Nonhuman Animals
This episode, The Goode Family, King of the Hill, The Simpsons, Atlas Shrugged and Stephen Fry all have something in common, they were subjects of episode 59 of Coexisting With Nonhuman Animals!  I'm sure Mr Fry will put that on his CV, and about Atlast Shrugged, I've always been a favourite podcaster of the Teabaggers.
Today I'd like to tie some more threads of pop culture together, in an attempt to sew a Vegan T shirt from the scraps.
To finish off a story from last episode, and because my Angry Right Wing friends have short attention spans, I'll let Atlas shrug and go on strike right now.  Hey, that ties in with Bill Mahers show Realtime with Bill Maher, Atlas Shrugged, Ayn Rand wrote about the smart, hardworking, inventive, creative and absolutely essential people of America going on strike, and look, Sarah Palin QUIT again!  She's a true believer in Objectivism!
Atlas Shrugged was published in 1957, yet has some inklings of Veganism within, promoted by those nutty Sociologists, a world where those damn socialists with their highways and hospitals and education systems have run amok, blame it all on Sociologists and their Soybeans!
Yes, the Soybean will be the death of us all!  Thats what happens when the Vegans try and take over, we'll all end up naked, no clothes, no medicine if we don't set cats on fire and swing them by their flaming tails, its vital medical research you know, we'll be out there trying to steal nuts and bolts from the railway tracks, and its all because of those Vegan sociologists and their soybeans.
Read more »
Posted by JayWontdart at 10:42 PM No comments: 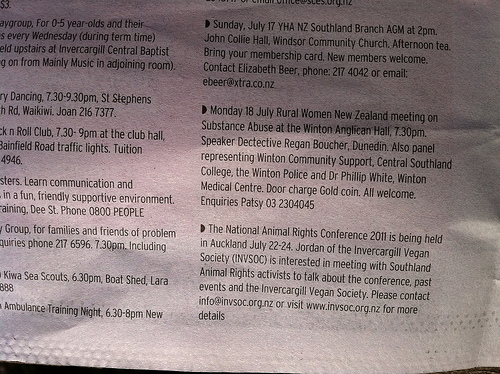 Also included in this issue of The Eye, lots of wacky "Non Vegan" ads, here are but two: 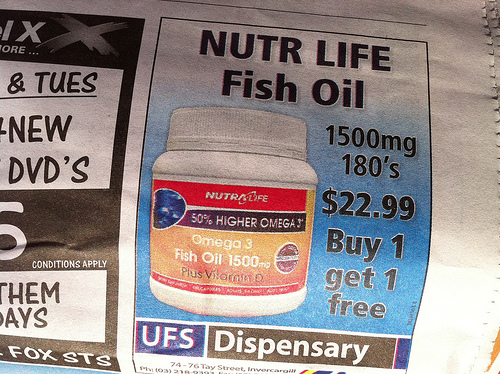 Fish Guts make everything better, two for the price of one!  Who WOULDNT want this product?!?!?! 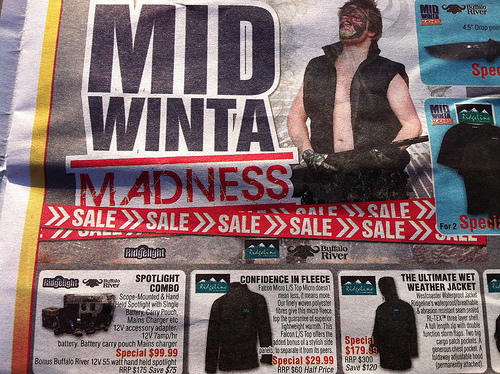 Gerald in Marketing : "Right, so who's our target demographic...I KNOW!  White guys wearing black vests, facepaint, camo gloves and did I mention facepaint?  OH, and they're usually pissed off, so make it about "madness", and make the sale banners look like police cordon tape, you know, like "have you just killed, skinned, preserved and eaten your partner?  To celebrate, buy your tenth gun from us!"

Also advertised, a long jacket that mentions "will keep your ears warm", because THATS the largest problem with Manly Men killing other animals for kicks in the early morn, cold ears, right?

Gee, us silly Vegans sure are missing out! 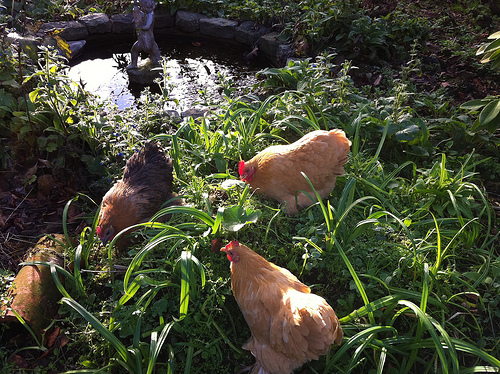 Posted by JayWontdart at 7:24 PM No comments: