Last month I visited the Invercargill Public Library and found they have a Vegetarian section.  I saw the many "Veganism is a fad diet to lose weight and look sexy as heck!" books, and thought "ooh, wouldnt it be nice to have Vegan childrens books available at our library?"  I thought about donating a copy of Vegan author Ruby Roth's books "Vegan Is Love" and "Thats Why We Dont Eat Animals".

And now, a month later, we have!  You'll find these great books in the Invercargill Public Library in the children's section, catalogued under 613 :-) 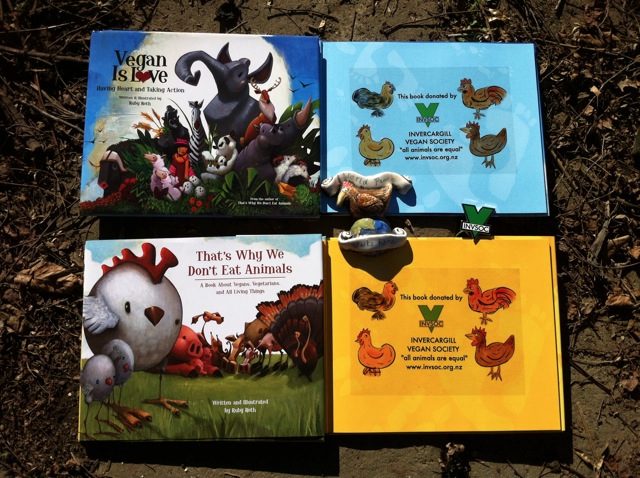 Curious Hen looking at a drawing of a Yellow Hen :-)  I used the fantastic Paper app on my iPad to draw doodles of Chicken Friends :-)  The stickers are printed on clear "self adhesive" plastic, five dollars to print an A4 sheet that had both stickers on it, which was then cut in half.  Worked out quite well, I have a couple sticker proofs which I've cut into Chicken Friend doodle stickers :-) 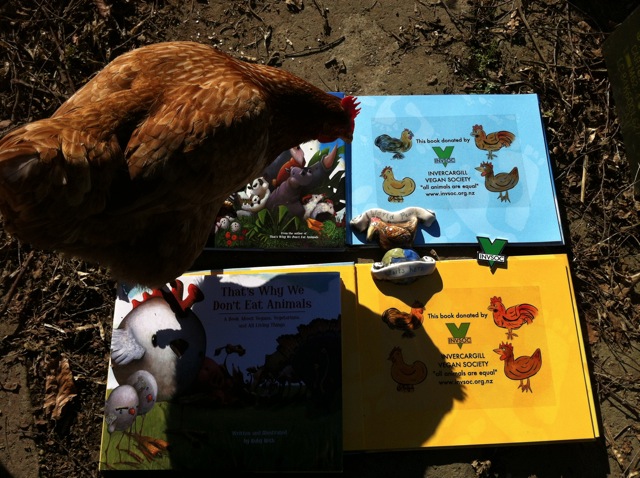 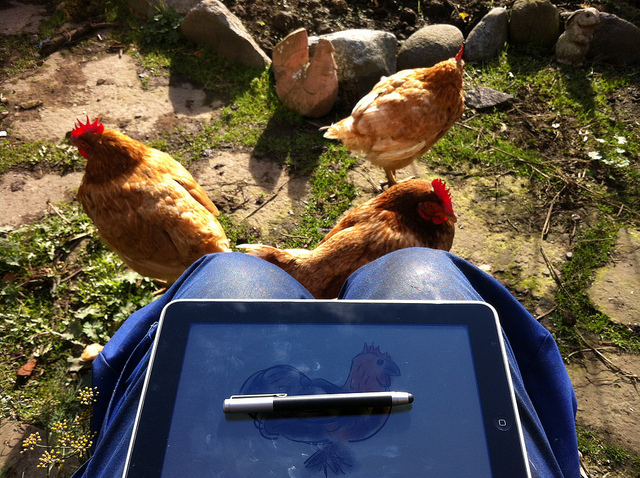 "Vegan is Love" is Ruby Roth's second book, with a strong Vegan message. 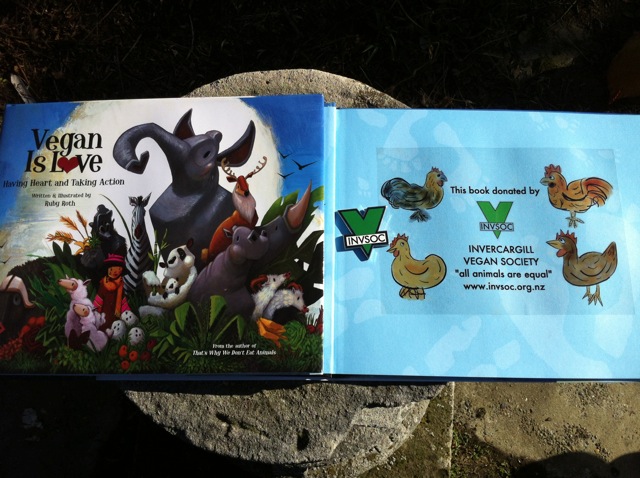 "Thats Why We Dont Eat Animals" is her first book 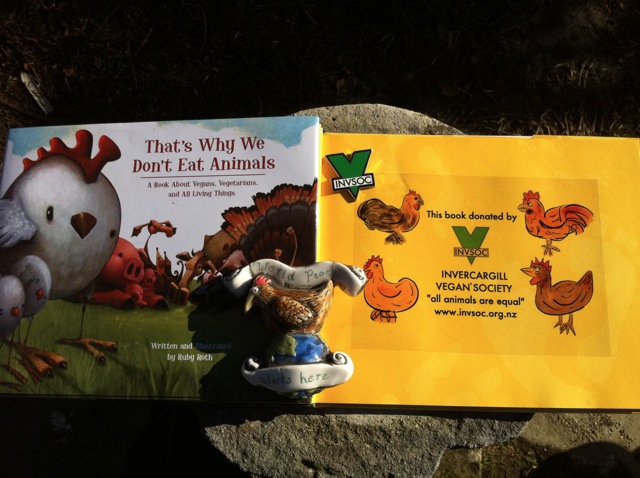 I went to the library with local Invercargill Vegan Society members Kerri and son Jess, these books are great for Vegan families, as well as families who'd like to learn more about Veganism too :-) 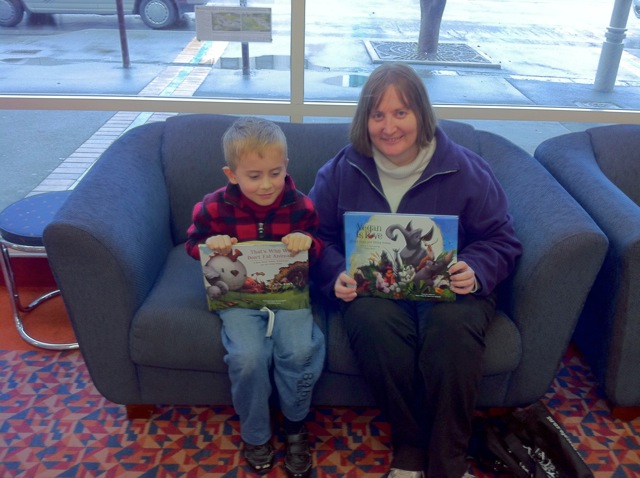 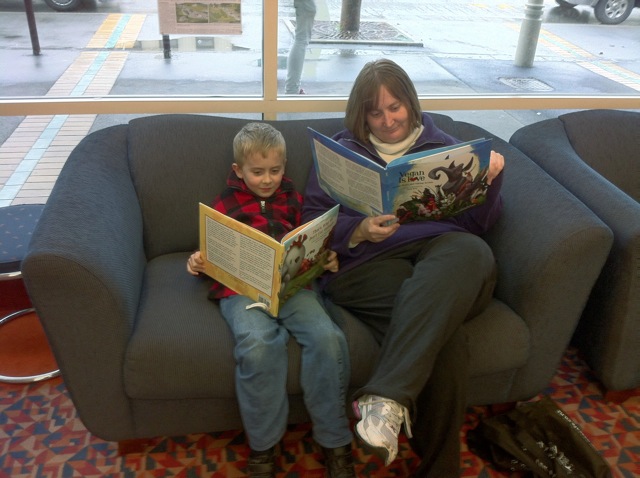 The children's library also has THESE rather graphic looking books!  Hard to tell their exact stance, they're almost like shock horror Earthlings style books, very unexpected to see them highlighted right at the counter, where 5 year olds are checking out books from the library! 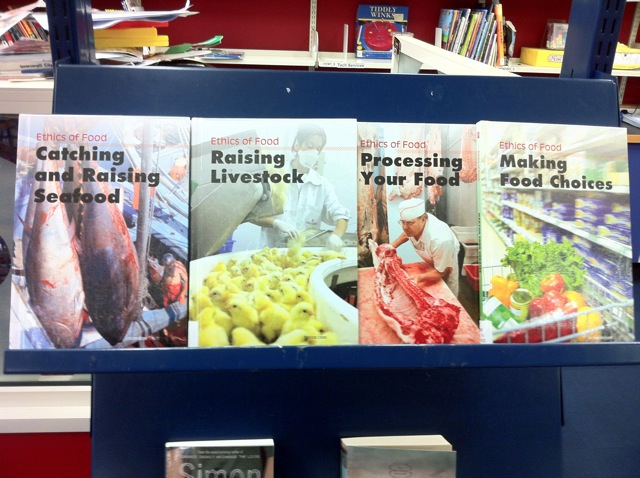 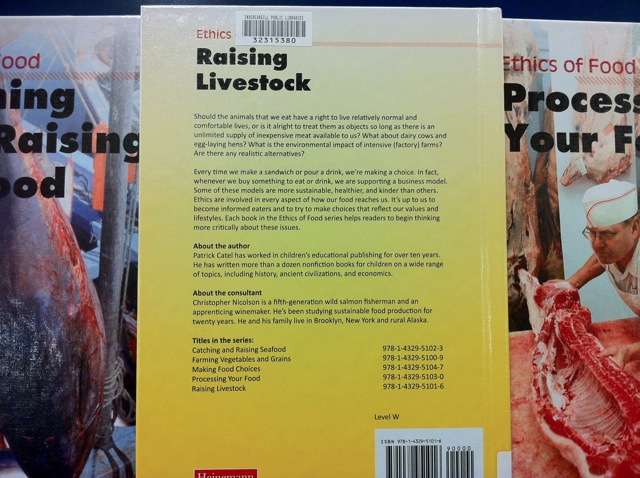 A few books in the series had mention of Veganism, which is good! 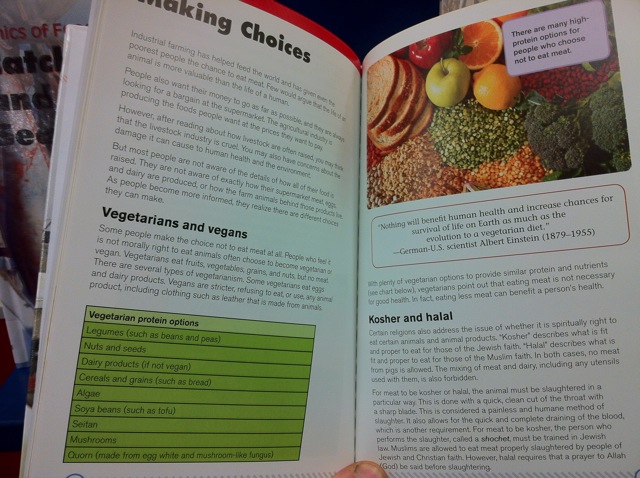 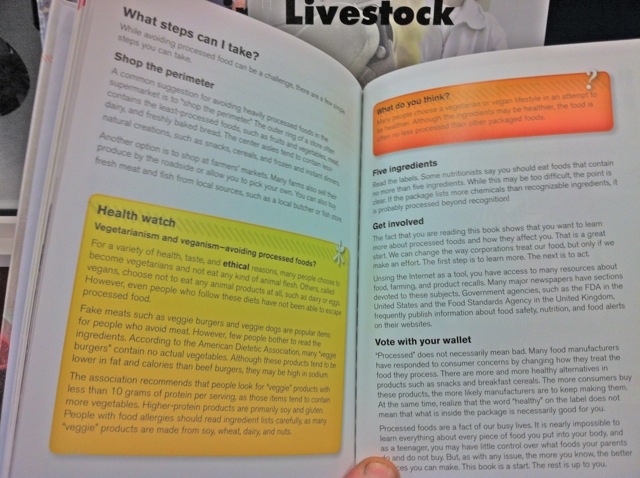 "at least one thinker has argued that animals have benefitted from the process of being domesticated (tamed by humans).  Thousands of years ago, wild cattle and sheep learned (note : I'm sure they joined voluntarily!) that human communities offered them protection from wild animals and provided a regular supply of food.  Individual  sheep or cattle might be killed for food by humans, but the species as a whole thrived once it was domesticated."

AH!  Of course, so they realised as long as they voluntarily stayed inside fenced off farms that they'd be safe from the boogeyman who lived out in that awful wilderness somewhere, and all they'd have to pay with was each and every one of their lives?  Bargain!!! ;-) 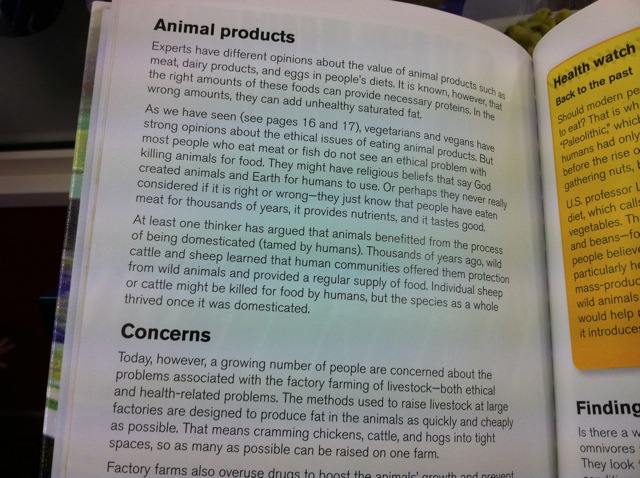 "The number of vegetarians around the world is small.  A 2008 survey showed that just over seven million Americans called themselves vegetarian....." WOW, thats nearly twice the New Zealand population of 4 million! :-)

"India, the home of several religions that promote vegetarianism, has the worlds largest vegetarian population..........399 million people - or 40 percent of the country - did not eat "meat" of any kind" 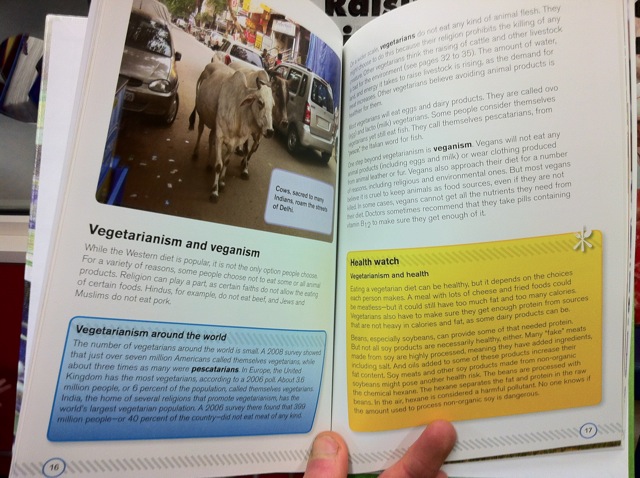 While in the area, we also found a fantastic local geocache :-) 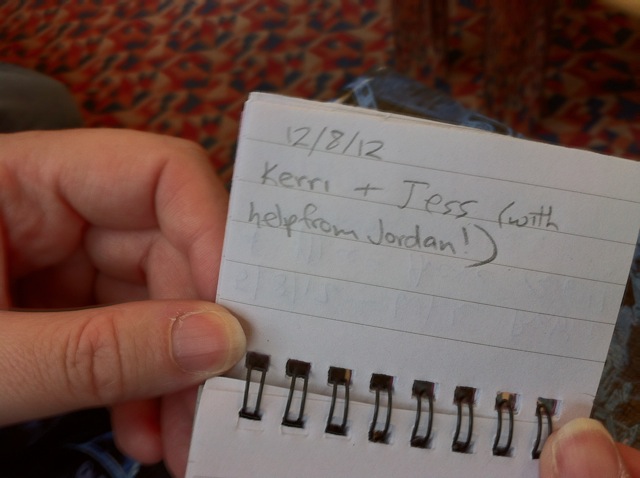 "I want you to bring your books back", apparently you can pay off late fees using a can (filled with baked beans etc) or "a toiletry item".  I wonder how many wiseguys will try paying off fines with single pieces of toilet paper :-) 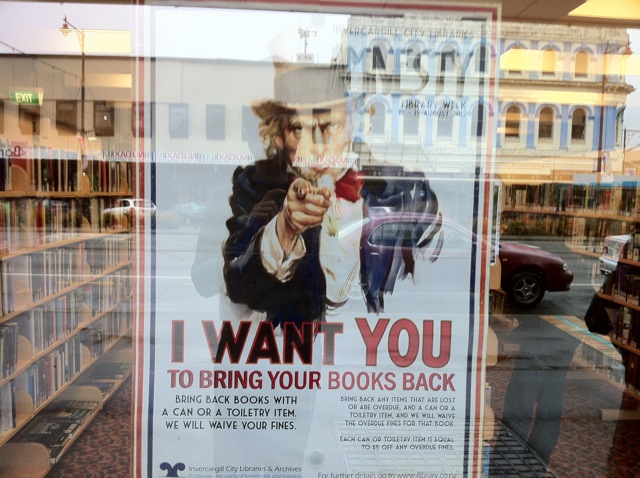 Our books will be laminated and catalogued before being put out into the library.  Its great to think of more Vegan childrens books being out there, to neutralise the Non Vegan books :-) 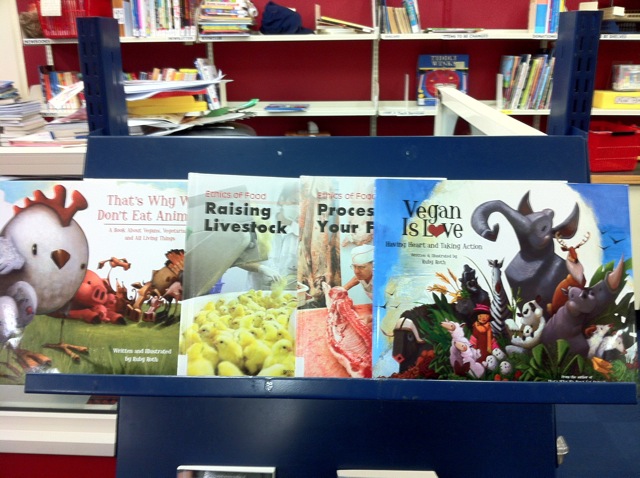 You can find the Ruby Roth books in the Invercargill Public Library, children's section :-)  They are in the 613 section 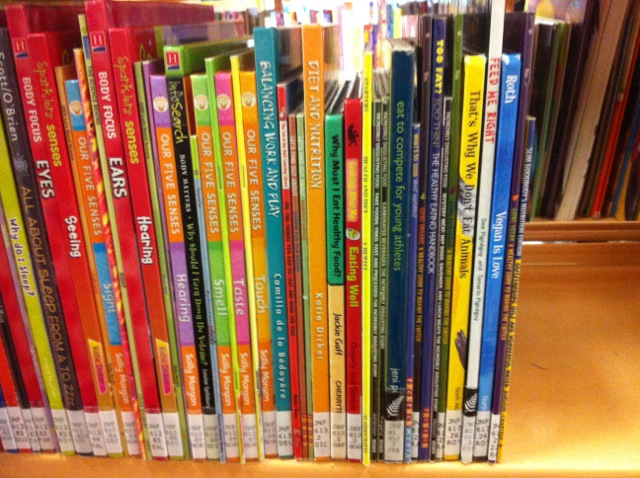 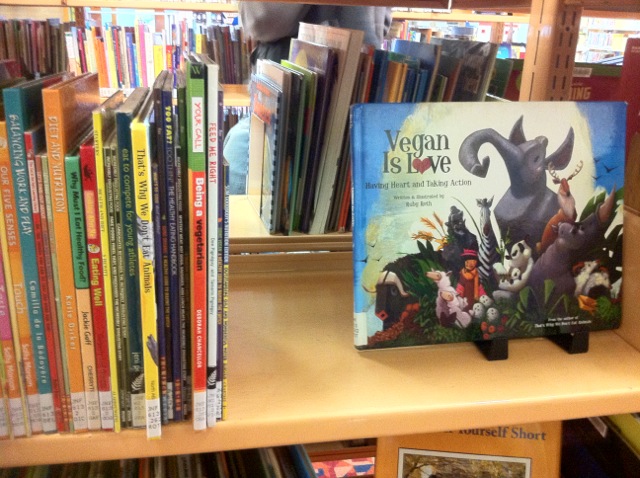 I hope that many Invercargill families can enjoy reading about respect for Other Animals together :-) 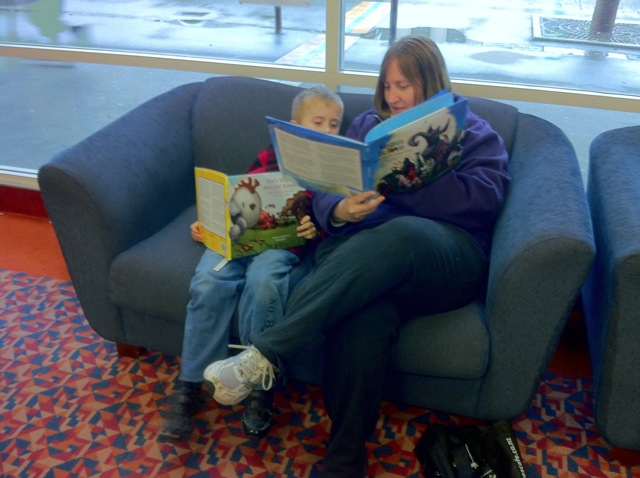 Ruby Roth's books "Vegan Is Love" and "Thats Why We Dont Eat Animals" are fantastic! :-) 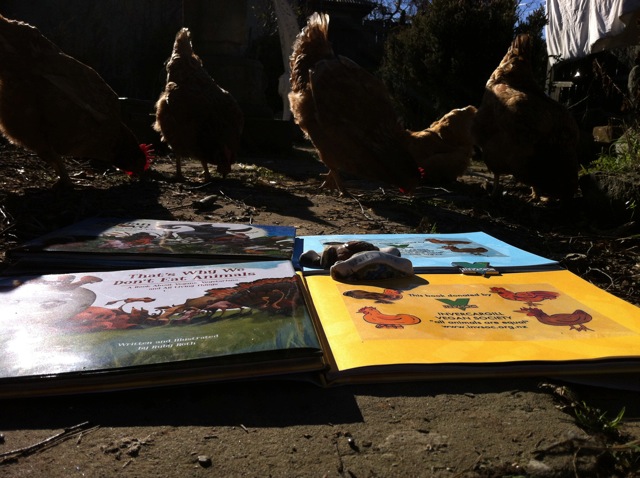 Posted by JayWontdart at 9:28 PM