"Chicken so tasty it sells itself"

I've never had a problem with dead bodies, I grew up going to family funerals, I've been a pallbearer numerous times, including the time I carried my bloated Uncles corpse, who died alone, and wasnt found for a couple weeks having been in the Australian sun, flown back home in a cardboard box, at the back of a plane.  Think about who else is with you next time you're on a plane!
I always buried dead birds just fine, and have watched Autopsy footage more times than I could remember.  Realistic footage such as The Animals Film and Earthlings dont phase me.
But there's really something HIDEOUS about the flesh of dead animals, the bodies of killed Chickens in particular really upset me.  Even before I met my Chicken Friends, the thought of people killing Birds was most offensive to me, the friendliest, communal minded animals known to mankind, who SING for crying out loud!
I refuse to watch that "What Makes for a Grievable Life" video, and the flesh section of Supermarkets is more off putting than a morgue to me, for my job I've been throughout a few hospitals now, I've seen preserved body parts in jars, been locked in a walk in refrigerator filled with human blood and explored the Morgues, nothing on seeing innocent animals who've been KILLED for our pleasure.
This Facebook ad is particularly heinous: 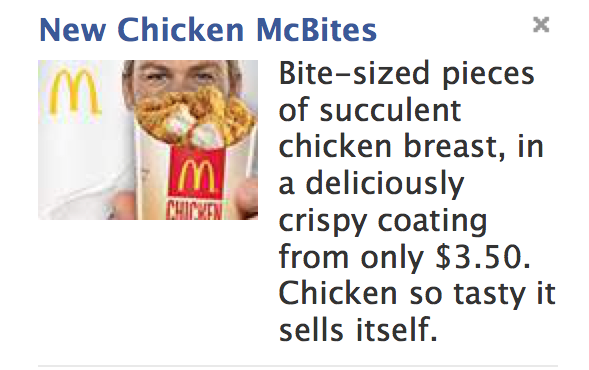 "IT's" cannot sell "ITSELVES", Chickens, and other animals, are most certainly not an "IT", but *THEY*, *HE*, *SHE*.
And to sell their flesh, chopped up, possibly from multiple Chickens, for THREE DOLLARS FIFTY?  Their lives are *priceless*
Heres something that Chickens are good at "selling", that *THEY* are lovely, gentle animals, who love life, love each other, love *THEIR* human friends, that *THEY* love *THEIR* lives.
*THEY* also love Dustbaths:
Digging
Eating Falafel
And running to meet their Human Friend (ha!) each and every day:
My other videos can be found here
http://www.youtube.com/jaywontdart
The least we can do for our Chicken Friends, and all other animals, is to respect *THEIR* individual lives, that *THEY* are not "things", but other sentient beings, with just as much right to life as you or I.

They are why I promote Veganism.

Posted by JayWontdart at 7:37 PM