***UPDATE  I've since seen the movie, which features the work of TWO Invercargill Vegan Society members! :-) ***

Tonight I attended the red carpet premier event for "Two Little Boys", a new movie which was recorded in Invercargill.  It stars Bret McKenzie from Flight of the Conchords and Lord of the Rings alongside Australian celebrity Hamish Blake, of the Hamish and Andy Show.

I attended the *red carpet event*, I didnt attend the premier of the movie inside :-)

Held in the majestic Civic Theatre, where earlier we Vegans attended Men in Tutus with our friend Justin from Hellhound Hotdogs, it was a superb night. 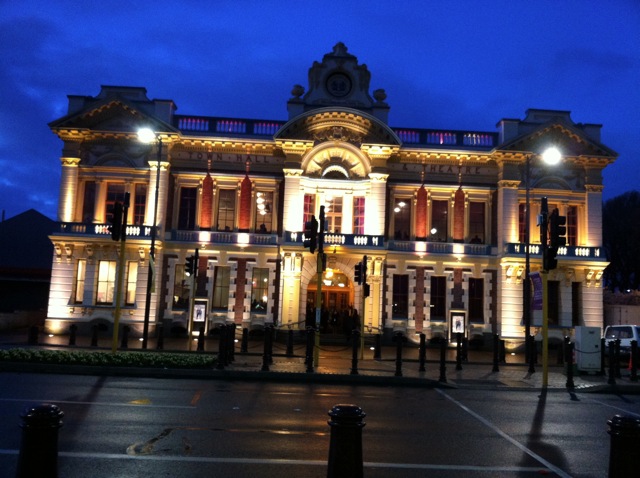 Well, superb as far as excitement and entertainment, the weather had fluctuated all day from pure blue skies one minute, to HAIL and chilling winds soon after!  Bizarre. (NZ classic "Four Seasons in One Day" music video by Crowded House)

Inside "the world leader in dog and cat nutrition" trailer played the Wellington International Ukulele Orchestra! 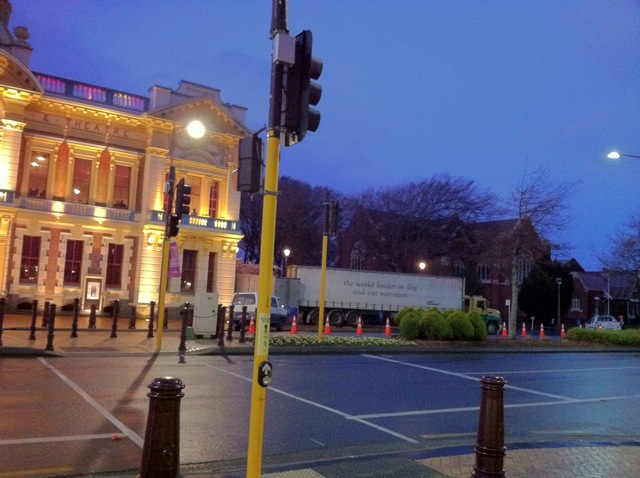 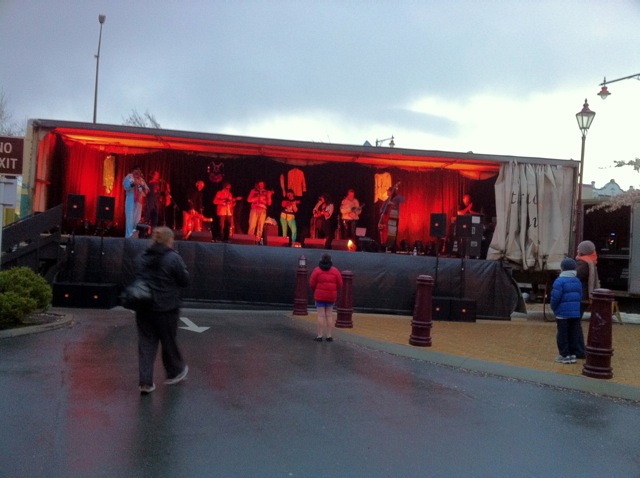 I recognized many of Invercargill's rich and powerful, like Caleb here, who I went to high school with.  Hi Caleb! 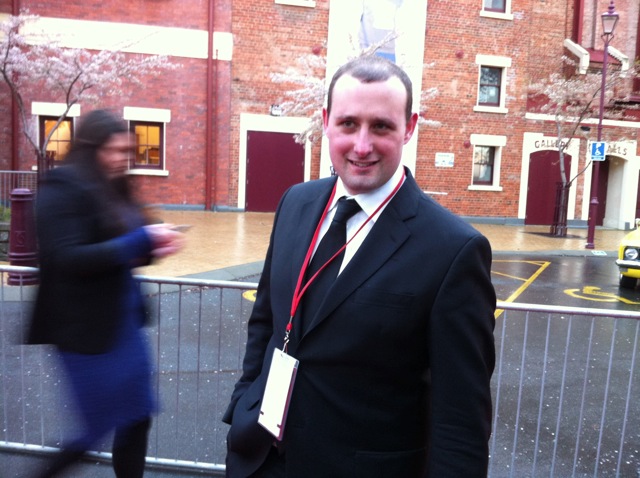 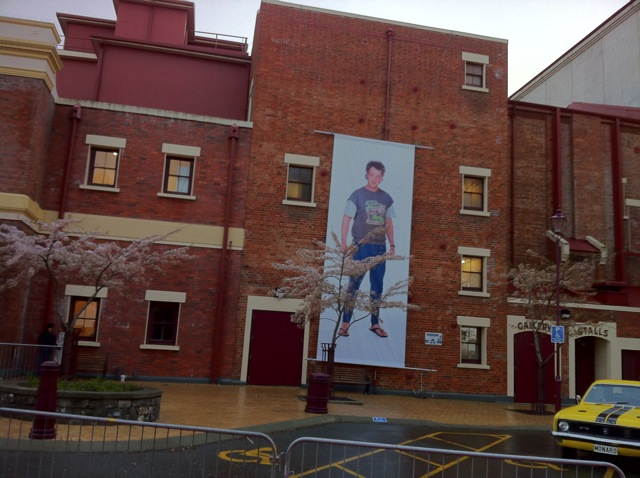 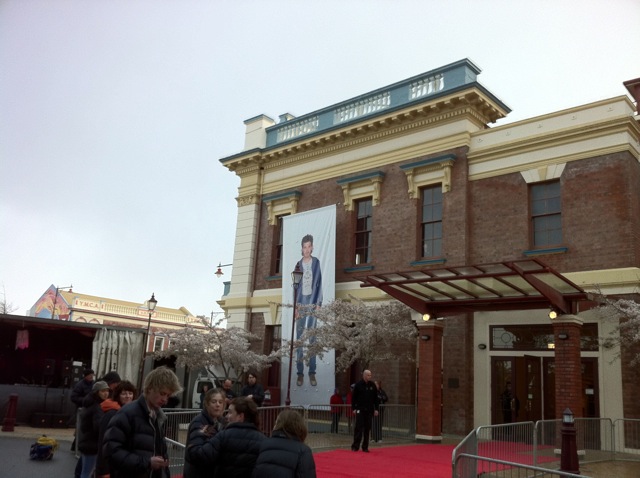 As seen in the trailer, the movie is about the troubles surrounding an accidental death of a Norwegian tourist visiting New Zealand.  A daily occurrence!  (I'm *joking* Nor-we-gish readers, *please* come and spend your money in safe, secure, live-able nation of New Zealand!!!)

Actors wandered about the red carpet line as "Norwegian Tourists", asking where their friend Jeurgen ("yur-gen") was........I didnt have the heart to tell them, but I *did* explain that based on the trailer, they should stay away from Brets character "Nige"! :-)
A civic celebration which I could commandeer?  Cripes son, I'll be there with a sign saying GO VEGAN! (or more accurately "go Vegan".

When "The Norwegian Tourists" approached me for the third time in twenty minutes, "where is Jeurgen?  Do you know where Tuatara Backpackers is?", I asked if I could take a photo with them.  I gave them the *sign that I'd hastily made*, and told them "...as you already know, being from Norway, "Vegan" is a great holiday town, by the Tahitian border....right?". 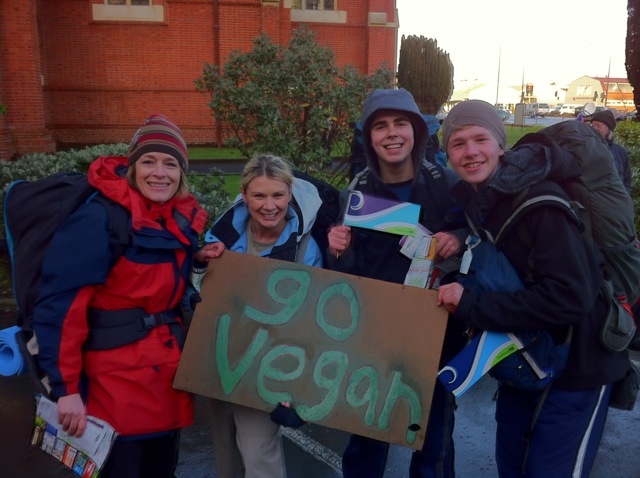 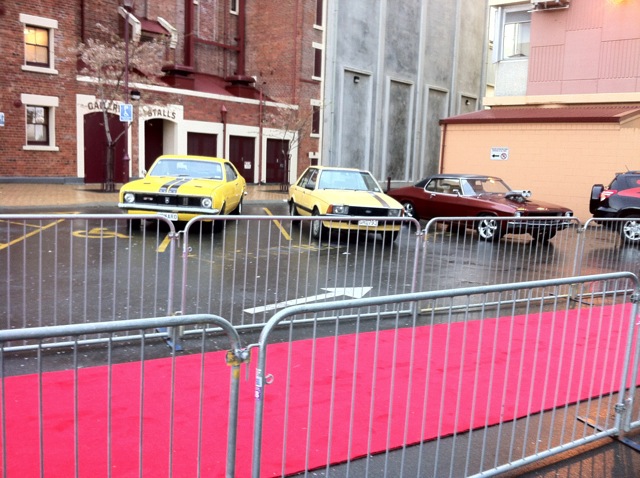 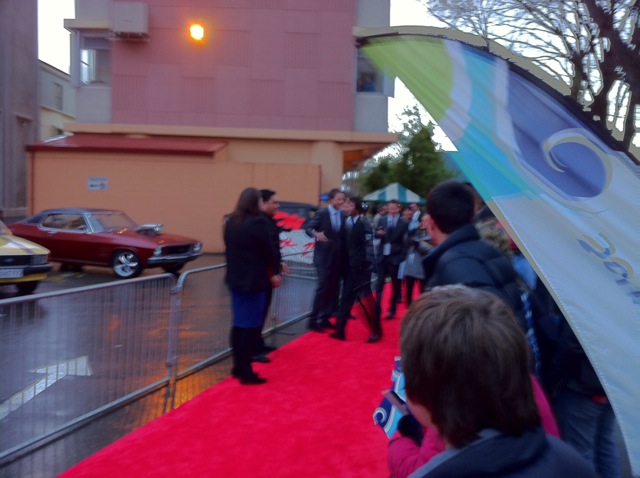 and then its showtime! 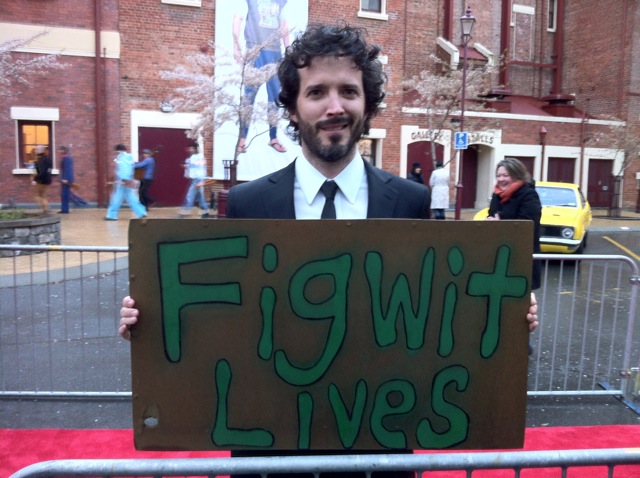 Figwit is a fan favourite character from The Lord of The Rings series, Bret McKenzies first movie role.  (Wikipedia)  According to Know Your Meme:

"The name “Figwit” was first conceived in early 2002, when an Israeli college student named Iris Hadad noticed McKenzie in the background of the Council of Elrond scene. She described him as “perfect, pouty and gorgeous” and dubbed him Figwit, a made-up acronym for “Frodo Is Grea… Who Is THAT?!” which is meant to convey the swoons of viewers upon seeing his face in the film."

"When Frodo says “I will take it!”, we are so impressed we start to think “Frodo is great!" But before we finish, the camera pans and we see Figwit, smoldering enigmatically in the background. All other thoughts are whisked away by that elf – who is THAT?! He’s gorgeous!

In March 2002, Hadad and her friend Sherry de Andres launched the fan site Figwit :Lives for McKenzie’s character, which featured a variety of fanart and songs about the mysterious elf character."

"Figwit Lives" could fit the "Frodo Lives" saying from decades past.


I could either go there with no sign, a crummy sign saying "go Vegan" or a poorly made sign that combined an Animal Rights message AND a mostly forgotten Internet Meme :-)  I chose the latter.

Bret recognized the name and was happy to pose for a photo with it.  As far as I know, after all the fan art and official autograph cards and even Lego figures (Google Images), its the first time Bret McKenzie has been photographed directly connected to the Meme :-)

Television interviews with the three main stars, the bald headed security guard blurring his way from the right was later yelled at by a camera operator.  I believe it was the TVNZ camera guy, as they set up a camera shot for an interview, the poor Allied Security employee must have been SLIGHTLY visible in the perfect camera view.  The camera guy *screamed* and lunged forward from his equipment: "GET OUT!!!" in an incredibly rude fashion.  Truly Christian Bale incident or Alec Baldwin Voicemail for his daughter level anger.  How rude!  It happened a further down from this no doubt lovely camera crew, as I stood next to the other, screaming camera guy. 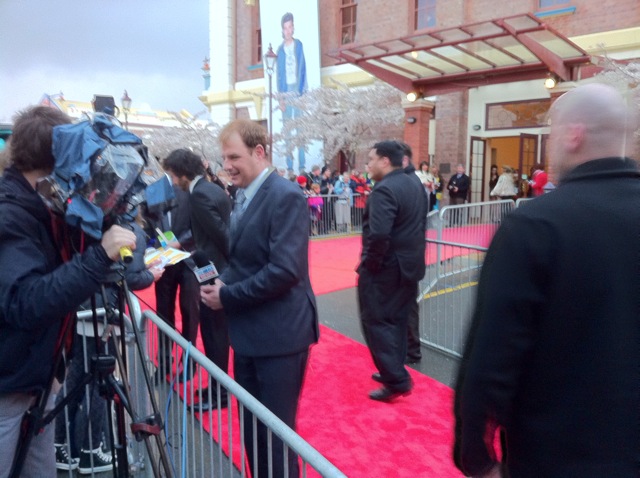 It was lovely to attend the *red carpet event* for a movie premier :-)  I kept the especially crappy "go Vegan" side of the sign to myself.  There was an astonishing number of women wearing animals fur, including whole animal bodies, draped around their necks.  Surely it cant be *that* common to own animal furs in Invercargill?  Are they hired for the event, "oh daaaaaaaaaarling, I'm going to the Two Little Boys premier behind the City Council building, I simply MUST wear the hair attached skin of another species of animal around my neck!" ?  I wasn't going to angrily confront them, because as a Vegan, holding the Invercargill Vegan Societies motto "all animals are equal" to be self evident, I'd also have to angrily chase anyone wearing hairless animal skin ("leather") down the red carpet too, anyone Non Vegan :-)

I was happy mostly showing the Figwit Lives sign, to puzzled smiles. 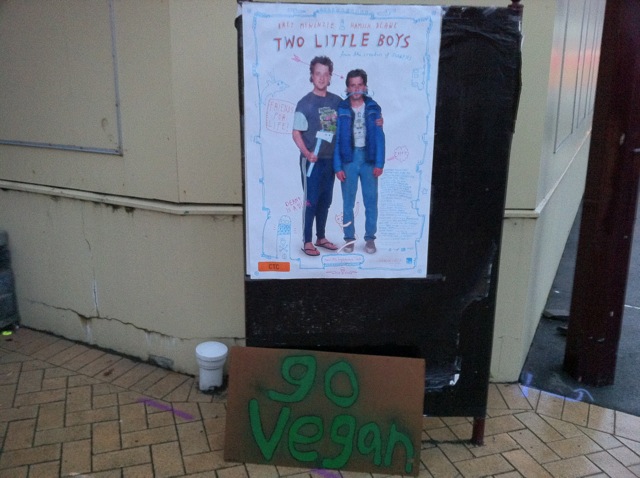 The TVNZ "microwave link", how live tv is "sent back to the studio from location". 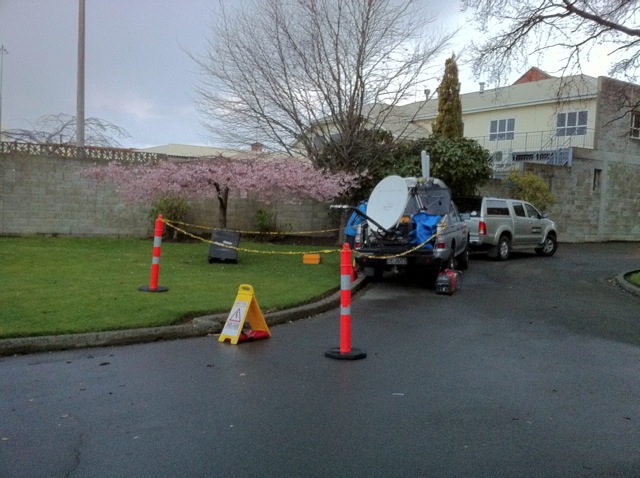 Apparently after the camera guy had screamed at a security guard in the way, he STILL wasn't satisfied, so TVNZ had video from inside, out of the cold.

The Southland Times newspaper live blogged the event.  You can see my big ugly back against the curved banner, the dark shadowy figure is yours truly's :-) 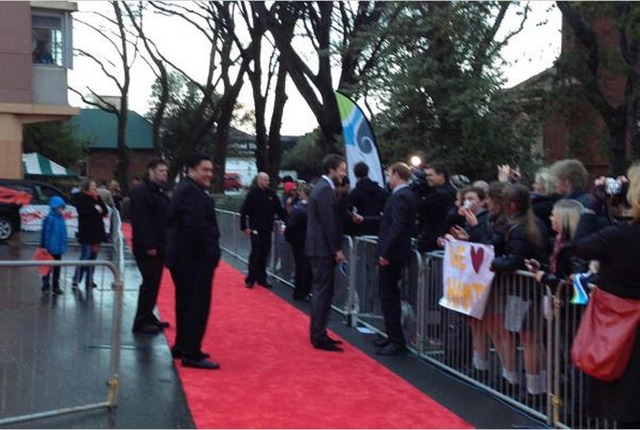 "7pm: Fans have created signs for their favourite actors from the movie but there could be some sign envy for Bret McKenzie.

McKenzie is possibly feeling a little deflated given the fact his pen-drawn sign is simply his name scrawled on a small piece of paper while Hamish Blake has been treated to a large, colourful specimen." 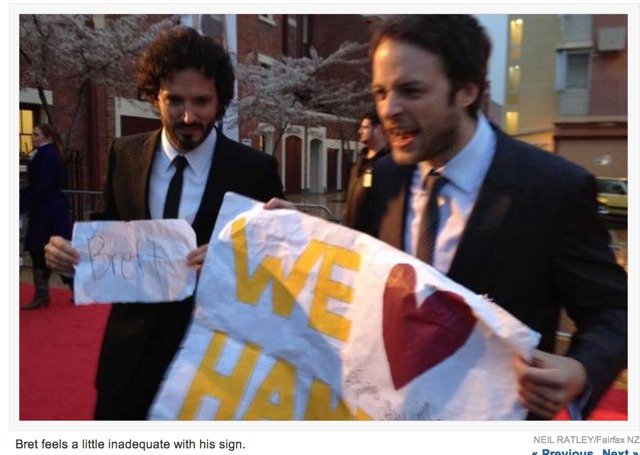 I guess my Internet Meme reference whooshed over the newspapers knowledge of obscure pop culture - I *had* made a sign for single t'd Bret :-)

A New Zealand icon who's appeared on The Simpsons, been honoured by the Queen of England, won an Oscar award for his songs in the latest Muppet movie and co starred in the fantastic HBO tv series "Flight of the Conchords" - with a sign I made from spare hardboard and green spray paint outlined by black Vivid marker pen :-)


Video from my place along the red carpet


A wet and windy night, but it was worth it to be part of spreading the good news: Figwit lives! :-)

***UPDATE  I've since seen the movie, which features the work of TWO Invercargill Vegan Society members! :-) ***
Posted by JayWontdart at 1:18 AM