The lovely Vegans inside the SPCA made sure a Vegan recipe went up! :-)  Best of all, its the first recommended recipe :-) 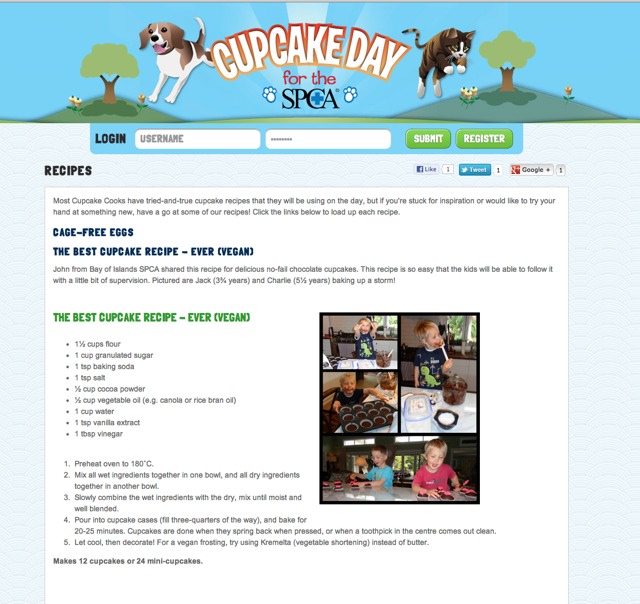 The Royal Society For the Prevention of Cruelty to Animals (SPCA) of New Zealand is holding another "Cupcake Day for the SPCA", where bakers around New Zealand will bake iced cupcakes and give proceeds to the SPCA to help with animal shelter upkeep.
The website asks we use "barn raised" or "free range" eggs :

"Most cupcake recipes call for eggs - but do you know which eggs are best to use?
Whe

n you bake your delicious cupcakes for Cupcake Day, we ask you to please consider using only free range eggs or barn eggs in your cupcakes. These eggs come from hens that are kept in conditions in which they are able to display all their natural behaviours - they are able to walk around and flap their wings, have deep litter/dust in which to scratch and dust-bathe, private nest boxes in which to lay in peace, and access to safe roosting perches at night.
WHAT'S THE DIFFERENCE?
Free range eggs come from hens that are are free during the day to range outdoors where they have plenty of room to forage, dust-bathe, stretch and flap their wings, and perform their natural behaviours. They have an indoor area in which to shelter, feed and roost at night, and nesting boxes in which to lay their eggs in privacy. They are kept in small flocks.
Barn raised eggs come from hens that are housed in large barns where they are free to roam and express their instinctive behaviour. They are able to perch to avoid danger, dust-bathe to clean their feathers, nest to lay eggs and socialise with other hens. Feed and water stations are placed throughout the shed.


SPCA APPROVED EGGS
The SPCA runs an accreditation scheme for eggs, pork and chicken, which guarantees that the products you buy have been farmed in a humane manner.

The SPCA Blue Tick is displayed on egg cartons from producers that have farmed their eggs according to the SPCA's high welfare standards - you will never see the Blue Tick on a carton of cage eggs!
Hens on Blue Tick accredited farms are not kept in cages.To earn the right to display the Blue Tick, food producers must meet the SPCA’s rigorous ethical standards and undergo thorough auditing on a regular basis by qualified and independent inspectors. The SPCA is the only independent body that audits animal welfare on the farm.
Free range eggs and barn eggs are currently accredited under the Blue Tick scheme. To see a list of brands to look out for, please click here.
For more information on the SPCA Blue Tick, click here."
http://www.spcacupcakeday.co.nz/get-involved/which-eggs.html

I sent a polite message to the SPCA about suggesting animal secretion free cupcakes could be made, with sample recipes given on their website rather than "barn raised" and "free range" birds eggs. A couple years back these Vegan cupcakes won big in America :

"Many people equate a vegan diet with deprivation, thinking that recipes prepared without eggs, butter, meat or other animal products are certain to be tasteless and boring. But the reputation of vegan eating got a much-needed public-relations lift this summer from an unlikely place — the Food Network’s popular new show “Cupcake Wars.” The program, which each week features four of the country’s top bakers facing off in three elimination challenges, recently pitted a 22-year-old vegan chef, Chloe Coscarelli, against three bakers of traditional high-end cupcakes. The judges were skeptical at first. “I was surprised at the bravery and boldness to parade four different flavors of vegan cupcakes in front of the judges when everyone else was clearly going to be working with butter and eggs,” said one judge, Candace Nelson, the owner of Sprinkles Cupcakes in Beverly Hills, Calif. “I thought it was possibly working at a disadvantage.”Ms. Coscarelli not only survived the first round, but did so to rave reviews. In the second round, her cupcakes — chocolate strawberry shortcake, raspberry tiramisùand crème-filled chocolate orange — captivated the judges. And then she took the final round — a presentation involving 1,000 cupcakes. The victory won her a $10,000 prize and the chance to supply the cupcakes for an OK! magazine celebrity event." 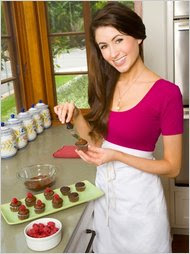 and Chef Chloe has only continued on to better and brighter things :-)

It would be lovely to see the Society for the Prevention of Cruelty to Animals (SPCA) promote making Vegan cupcakes, without direct harm to other animals through using them as "livestock", to force mothers into pregnancy for their milk, to restrain female Hens and use the results of their bodily cycle - to raise money for helping other animals :-)

While the SPCA is an Animal Welfare organisation, heres a good chance to politely email them and show them a Vegan cupcake recipe or two which could be promoted :-)

Who knows, maybe we'll have to encourage local Invercargill Master Baker Kerri to whip up some of her superb animal friendly vegan cupcakes and show the rest of the bakers how its done! :-) Kerri's Lemon and Blueberry cupcakes, with those fantastic sprinkles! :-)

I received a reply to my polite email showing Vegan options, and photos of my Rescued Hens explaining, gently, how all Animals deserved to be respected, and seeing them as "an egg machine" instead of a living sentient female animal was not nice.

Thank you for your email, and for your support of Cupcake Day.
I really appreciate your suggestion. We were already looking at compiling a list of recipes on the Cupcake Day website, and including a couple of vegan cupcake recipes with these.  The website is still being developed; at the moment we have limited functionality, but it should all be completed by the end of the month. Once this is ready we have the recipes section up and running.
We understand that not everyone eats eggs or agrees with their production, but we also understand that the majority of people out there will continue to eat eggs. Because of this, the SPCA has always encouraged the consumption of cage-free eggs which come from hens living in humane conditions.
Thanks again Jordan, and warm regards,
Selina Tang
Fundraising & Marketing Coordinator"

Jenny Moxham writes to the SPCA about having Vegan cupcakes

"On the surface, the SPCA's annual Cupcake Day seems like a brilliant way to raise money to help prevent cruelty to animals (Cupcake Day A Tasty Fundraiser, TDN, Aug 28), but if we look a little deeper, we discover that two of the ingredients in cupcakes - unless they're vegan - are actually derived by cruelty. I'm referring to cows' milk and eggs.

The production of both revolves around deliberately, and ruthlessly, bringing babies into the world for the sole purpose of killing them.

Each year in New Zealand around one million baby calves are slaughtered in their first week of life, just so their milk can be sold for profit to humans who have absolutely no need of it.

The "kidnapping" of the calf is as distressing for the mothers as it is for the babies yet they are forced to endure this pain year after year.

Each year, too, 3 million male chicks hatched by the egg industry are likewise mercilessly killed. They are gruesomely fed live into mincing machines or gassed on day one of their lives simply because males don't lay eggs. If the SPCA is serious about preventing cruelty to animals, wouldn't a cruelty-free vegan cupcake fundraiser be more appropriate?