Another day, another adventure in Veganism!

I dropped off some baking for The Southland Times, our local newspaper in thanks for their printing of our letters, and while I were out, the two new Vegans to move to Invercargill stopped by my house, we *just* missed each other by ten minutes or so!  Oh no! :-)  Theres always another day.

The Southland Times - a newspaper in 2012? - was predictably morgue-like, large layoffs are going to happen to the southernmost branch of Fairfax, an Australian conglomerate with its stranglehold on the New Zealand newspaper scene, owner of many news websites, and New Zealands online auction site TradeMe, our most popular website in the nation.

In primary school we visited The Southland Times building on Esk Street, the printers involved are fantastically obsolete, these huge metal machines with rolling conveyor belts every which way, for dead trees made into low quality paper to have ink thrown at them in a low quality way, eventually driven about and delivered, manually, to the people who'd put up with such a product, rather than checking the news on their smartphone or tablet....or if they felt old fashioned, their computer, in a reasonable way.

The Times is close to Whitcoulls, the New Zealand "bookstore" about to close down and die, at first there was talk that one of the smaller book chains here was to be absorbed into it, that they were so bankrupt that gift cards wouldnt be redeemed, causing uproar (because who HASNT got a few thousand dollars invested in bookstore gift cards lying around the house?), now it seems more likely Whitcoulls itself, a MASSIVE New Zealand brand will crap out itself.  Such is the way of print media in this digital age.


Now, The Southland Times printers are to be shutdown, future newspapers to be printed in the city of Dunedin 200KM away and driven down to Invercargill each day, cost cutting as print media clumsily lurches its way to the grave with its name nicely etched in stone...... it was an interesting experiment to see what kind of people you'd meet inside, waiting at the receptionist, what newspaper readers looked like!

Inside the doors, where you have to turn a hard left from the direct "STAFF ONLY" doors (I've been all throughout the building for my work in an Antique, Secondhand store, buying furniture from nearly every part of the building), you end up in a bank teller sort of situation....for people who've only used ATM's and Online Banking over 3G connections on their smartphone, its kind of like a line that never really moves, until you get to talk with a bored woman in her 40's behind a few plastic covered wires, the two or three strands of wire are to presumably put a barrier between any would be stabber, and also to remind the poor woman in her 40's that she is trapped in this job, like a woven steel web of a prison, until the whole operation goes "belly up" and dies.  Combined with the humming florescent lights, and the constant banging and clanking of women in their 40's who must have had some kind of qualification allowing them reporter-hood status above, its a hell hole allright!

Well, I was bringing Vegan baking, to thank them for including our letters in reply to PETA Australia and then the New Zealand slaughter board representatives, "Beef + Lamb".  Its always good to read about Veganism in the media, especially local media.  Honestly, five years ago I never remember seeing or hearing the word "vegan", now I seem to be surrounded by it, and thats a GREAT thing!

I tried to hold a smile on my face while I was surrounded by the newspapers customers, people in their 50's, 60's who more often than not reeked of despair and tobacco, in equal proportions, if I didnt hold such happy thoughts of Curious Hen and Black Chick and Yellow Hen and Ms Hen and Mr Rooster and all the Yellow Chickens in my heart, I could well have succumbed myself, such is the stench of death in a Newspaper company these days.

The people in the line, each one of them coming past the "STAFF ONLY" door, expecting to see nobody else waiting to be served for paying a debt (OH!  With newspapers, get this, you have to PAY to read their news, crazy, right!!!!???), upon seeing the line of 5 or so people (bloody MASSIVE for Invercargill!), they all swore in some fashion, "holy hell!", and then muttered to one another about how busy it is, how non busy they thought it would be.  One guy near the end of a line told the newest comer "yeah, I've been here forever", I was thinking to myself "buddy, you came in like 30 seconds ago, I've been here the best part of ten minutes, just standing in this spot, behind the woman with the preserved and dyed bright red animal skin bag, and her nicotine fumes, shut your damn whinging!  Besides, you're close to the exit, close to the outside world, free of print media, while I myself am somewhere firmly in the belly of the beast, a world of footsteps from the stained ceiling, humming from the florescent lights, and deep down in the basement, in the printing department, the sobs of the print engineers, steely men (and presumably women, although I've never met a female in the printing part) who work all kinds of hours to keep the giant car sized rolls of low quality paper going into the giant metal presses where they plop out covered in low quality ink, quietly weeping about their hardships, planning the last edition printed in Invercargill which they'll have snuck a cover design of "you can take this job and shove it ya bastards!", before they throw themselves into the ink intake grinder (BTW, in case you cant tell, I'm dramatizing this just a little), their bones, blood and fecal matter providing the "ink" for the last edition, yes, up here, four out of five people in the never ending, never moving queue you can smell the rotting guts of print media, yup."

But I didnt, I kept it to myself, and now I share the harrowing details with you, dear reader :-)

Eventually a second woman emerged to staff another old LCD monitor on a swiveling hinge arm along the counter, protected by a couple strands of bulletproof, stab proof plastic covered wire.

Here was my moment, where I emerged not as a crushed soul with an axe to grind about being charged for 53 weekend editions, "....what kinda crap are you mongrels tryin' pull here, like cards in a deck, theres only 52 weeks, what kind of scammy financial year runs on one year plus one week!!!  I want my 1.80 NZD back!!!", or as someone wanting to pause the delivery of these pulpy printings while they check themselves back into The Clinic, so their 53 week's worth of newspapers wont be delivered to an empty house, wasting precious news, and paper resources....ok, and money............NO!  I was here to take two ~$5 clear plastic containers out, each filled with 10 Banana and Chocolate Chip muffins, made to a Banana Bread recipe, alongside a couple of Boston Vegan Association pamphlets  and my INVSOC business cards, which you may or may not have seen at a supermarket community noticeboard near you.

"Hello!  I'm Jordan of the Invercargill Vegan Society, we'd like to thank you for including some of our letters in the past weeks, thank you so very much, as a small token of our appreciation, I've brought you some baking, Banana Chocolate Chip muffins, I hope you like them!  You can find the recipe on our website, on the card, and these pamphlets quickly explain what Veganism is.  I've been speaking with Michael and Frances (names of two staff members who popped into my head, I felt like I needed to name drop, as though I had a reason to be there, trying to bring baked rays of light into this dark, dark place!)  I really appreciate that you included our letters, thank you very much, have a lovely day! :-)"

With that, the woman took the collective 10 NZD worth of clear, made in New Zealand plastic, and put it down on her side of the counter, by the ancient computers keyboard, "thank you, I'll let them know".  Um right, she'll let "Michael and Frances" know that some guy from the Vegan society has dropped these 20 muffins off, which are presumably to be somehow shared among all the Southland employees of Fairfax, no doubt running out just before the poor printers, who'll no doubt include "....and 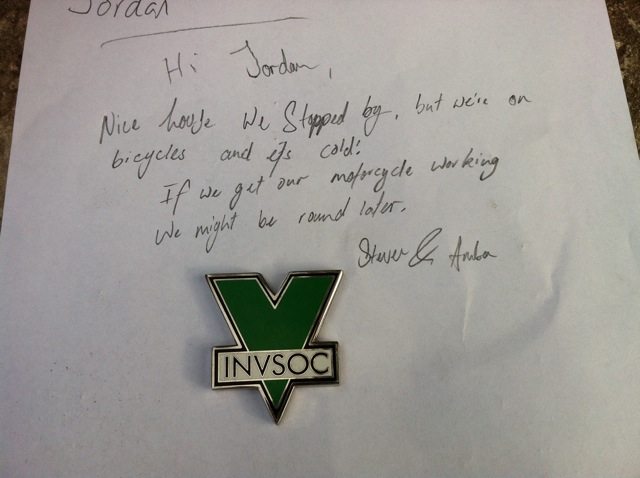 
***UPDATE*** 26th May 2012 The Southland Times will no longer print newspapers in Invercargill , as far as I know, there were no dramatic endings resulting in "unusual" ink, although the article above mentions several gruesome incidents from the quote "carnivorous" printer, a hand lost, all the skin ripped from another in a "degloving" accident, finger tips....
Posted by JayWontdart at 10:24 PM