Mrs Elephant, ex circus elephant I met has killed someone


NZ Herald article about "Mila", the ex circus elephant called the horrible name of "Jumbo", who I always called Mrs Elephant killing a vet after she received an electric shock from the fence caging her in.

Article about her former "owner" Tony Ratcliffe in 2008, in which the reporter frequently mocks the "elephant keeper", from his appearance to his behavior.  As we find out here, Tony Ratcliffe quote "fatally injured" a gang member who wanted to take Ratcliffes daughter out on a date using a circus tent peg….I'm imagining the guy was beaten to death with a solid metal peg the size and dimensions of a baseball bat, and later died of his injuries.  I knew about this incident from reading the article before I met Ratcliffe and Mrs Elephant….

I joined a single issue campaign about ending *all* animals kept in circuses organised by SAFE.
A photo I took of Mrs Elephant while "Elephant keeper" Tony Ratcliffe threatened me, as seen bottom right of photo, "YOU ANIMAL RIGHTS?!?!  YOU GET OUTTA HERE, IF YOU COME BACK, THERE'LL BE TROUBLE!!!!"  Lucky I still took the photo back in 2009, its here now in 2012, just a matter of pushing the shutter button on my fathers camera back then, and the moment is recorded. 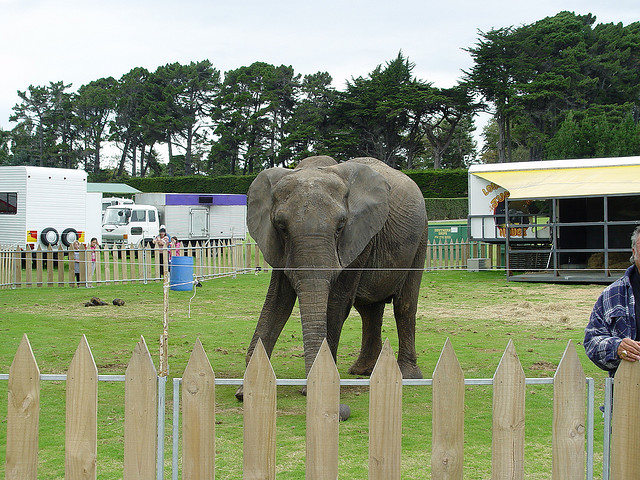 Mrs Elephant was eventually released to the SPCA, where we see she was planned to "eventually" go to an Elephant Sanctuary in America, once money was raised etc....here shes shown having bananas thrown at her by bored attendants, bananas in their skins with the plastic stickers still on....

Shes shown "rocking" swaying back and forth, from despair. She lived a horribly alone life, as the behaviorist at the end mentions, "shes given 28 years of her life, albeit not voluntarily...."

After the vets death, Tony Ratcliffe, "elephant keeper" tells his story after the death about how only *he* could handle her, or as he often says, "IT".  He takes a parting shot at SAFE right at the end, as the host says "yeah, thanks a lot, that was Tony Ratcliffe" and hangs up on the guy, its pretty rude how radio hosts always do that to callers!

Apparently Mrs Elephant will still be able to go to America, to live in an elephant sanctuary, finally with other African Elephants, I hope she'll live out the rest of her life in relative peace and quiet.

How do we best help Other Animals?  I wish at the time of the circus animal protest that I'd included  signs promoting Veganism, about helping all animals.  For me - and to be fair, SAFE - it was never solely about "The Elephant in the circus", but all the animals, including the miniature ponies kept in dark inflatable tents, which you had to pay money to go inside and see.  Imagine being kept in the dark, as an air compressor ran, keeping the tent setup......

One of the most egregious photos I took is of "Jumbos House", the awful white trailer she was often kept in, which she eventually tore parts out through frustration, theres signwriting claiming "Jumbo thanks these sponsors for her new home", all steel fabrication companies etc....why in the blue hell would she be PLEASED to be carted around New Zealand in this awful metal contraption, kept behind electric fences (which eventually electrocuted her, leading her to kill someone else).......


"A witness to the fatal accident at Franklin Zoo says the elephant was triggered to kneel down, crushing her keeper, by what appeared to be a misinterpreted circus command: "down".

"Put me down, Mila," the keeper, Dr Helen Schofield, was heard saying as she patted the elephant's head.
Mila obeyed by going down on her knees - crushing Dr Schofield.
"The elephant didn't attack the lady. The elephant was in a circus mode. It was following commands," said the zoo visitor, who did not want to be named.
He said the elephant had seemed to him to have acted as if she were performing a circus trick."

Please promote Veganism.  Its easy to be Vegan, and it helps everyone, from circus elephants, to hens kept in cages for us to take their eggs, to pigs killed for their body parts.

Posted by JayWontdart at 8:15 PM