A couple of days ago I found Curious Hen near dead.  Now that she is two or three years old, her "farm Hen" body is having reproductive issues, due to how we've harmed these Hens to make them produce such an unnatural number of eggs.  No animal in nature naturally lays eggs the way we make "laying hens" perform, one after the other, all the time, shocking their bodies into laying cycle after laying cycle.  Their genetics are winnowed down so only the "highest producers" pass on their genes, Genetically Engineered monsters. 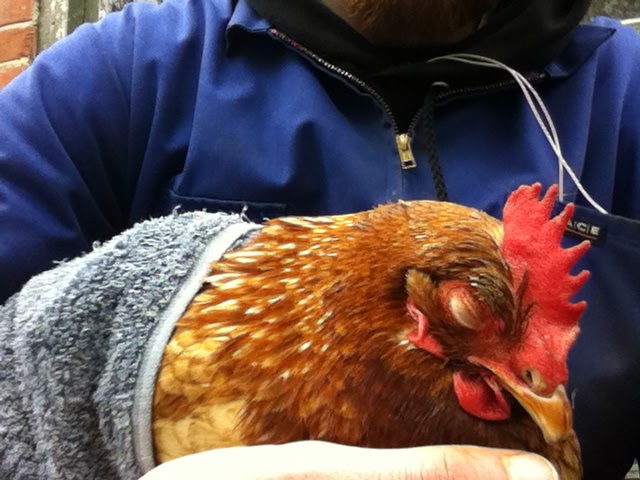 You have to give the devil his due, and in this case, of farm animals, they simply can't live forever in this state.  "Broiler" Chickens, killed for their flesh grow exceedingly quickly, by the time they are around a month old, these babies are adult sized, BIGGER than what adult Chickens should ever look like.

In the case of "Laying" Hens, by the time she is 18 months or so old, her female reproductive system will start to crap out, producing less eggs, and with more difficulty.  They risk becoming Eggbound, an egg stuck inside their bodies, causing lethal infection.

I found Curious Hen sitting still by herself, very weak.  I recognised that she must have had egg issues, from a broken egg inside her.  Every now and then, my Rescued Hen friends pass "soft eggs", hard, rubbery yellow things, like a fried egg or omlette, smelling like hell.  They nearly kill them, from the infection and trouble caused.  The cause is simply age, their bodies can no longer continue making so many eggs, an unnatural number of eggs, as we've bred into our "laying" breeds.

Hens naturally do not sit very often, they actually sleep standing up in nature.  Rescued Hens will often sleep nested, sitting, because they've always been in a cage or confined space, its habit for them. 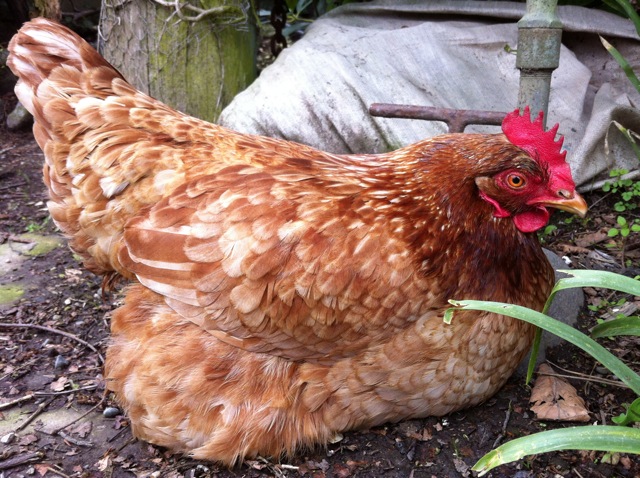 I took her inside, and gave her antibiotics orally, by needle-less syringe.  I ran our shower, to get the air humid, easier for her body to perhaps pass the obstructed egg, and kept her warm.  Here shes seen with heatlamps above her in our bathroom.  She refused to eat or drink, her body was shutting down. 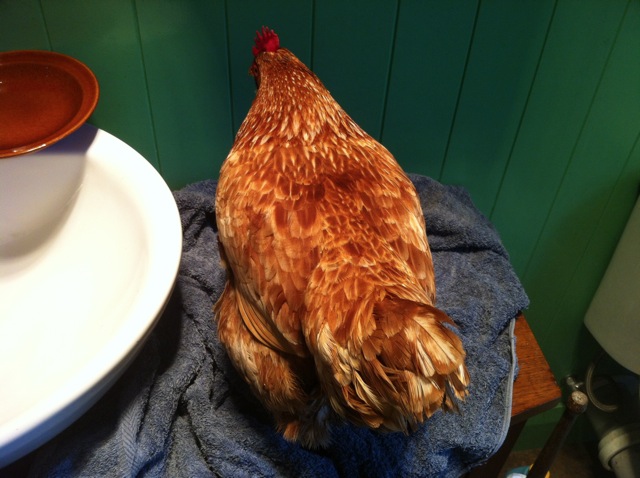 You can see her left eye, she's actually watching me!  In this condition though, even keeping her eyes open is difficult, they default to closing their eyes and breathing heavily.  They can barely stand.  When they have an infection like this, its as though they are entering a coma, without help they would drop unconscious and die in spasms.
Curious Hen has even laid a "lash" or two, which are essentially egg like lumps that look like a freaking testicle or something, kinda a rubbery yellow hard lump.........which has freaking "meat" inside....... Apparently they are caused due to damage to her reproductive system, and part of the lining comes away, to coil up and be crapped out in this hard "egg" like form. The flesh inside a "lash" is part of her reproductive tract.

Extremely Unpleasant to look at, imagine an "egg filled with meat" 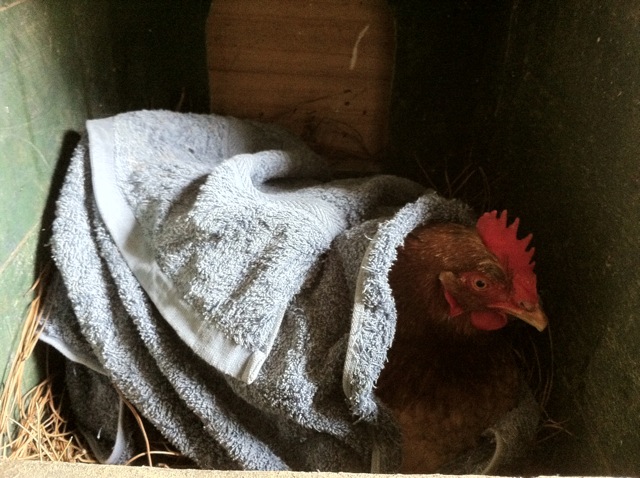 I kept her warm and dry, some online help websites recommend standing Hens in this condition in a bath of warm water, the steam is said to help their bodies pass the blockage.......but getting Chickens wet is almost always a bad idea, they catch chills very easily in this state.  I didnt want to get her wet at all.  I used the shower method, running our shower with her in the bath room with me, keeping her warm, the air humid.

Hard to believe this beautiful Hen was on deaths door, but she was.  Unable to eat or drink for a couple of days by the time this photo was taken.  She simply had no interest, and even stepping up to this garden was difficult for her. 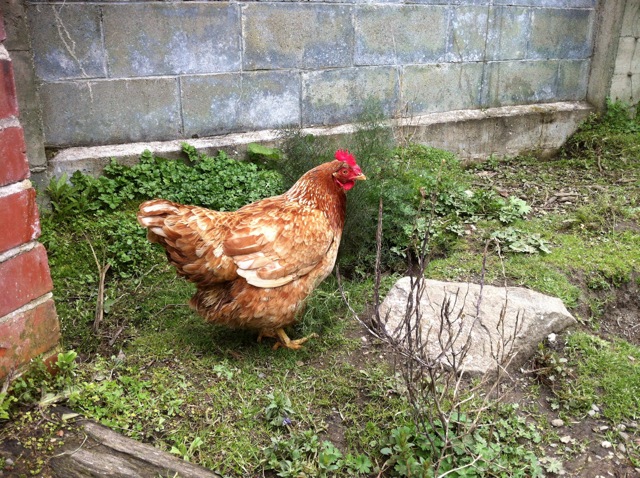 Earlier tonight, three days into her problems, I found this large segment of passed egg.  This is what a "shell less egg" or "soft egg" can look like, basically her body has produced an egg without a shell, or with a thin shell, and its rotted inside of her.  The obstruction stops her going to the toilet as usual, and can be lethal within just 48 hours. 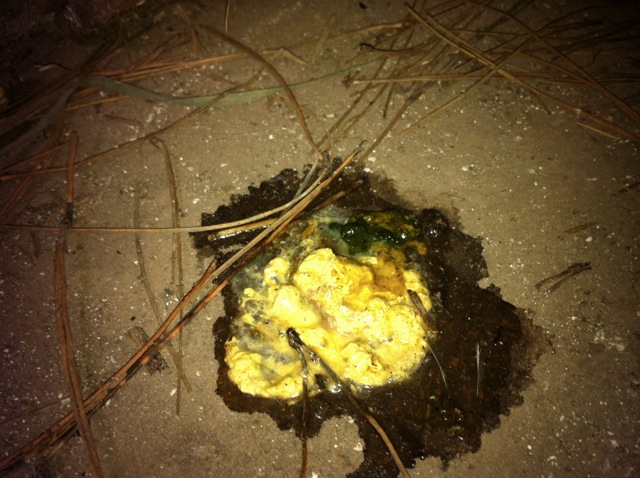 After three days of feeding her water by needle-less syringe down her beak, forcing her to drink against her will, and trying to encourage her to eat rolled oats, she seems to be getting better.  Tonight I actually found she'd flown up to her usual perch, instead of sitting lumped in a nesting box, barely able to keep her eyes open.  I'd kept her wrapped in a towel at night, for warmth, going in several times each night to check on her. I hope she will fully recover.  I love my friend Curious Hen.

Please, Go Vegan and help all Other Animals.  We've done this to Curious Hen and her brothers and sisters because we have a tradition of eating Chickens eggs.  They were never "meant" to make so many eggs, no animal is.  The industry kills them when they are around 18 months old because their bodies simply start to give up.

I hope that Curious Hen, Geiger Hen, Whole Hen and Home Hen will live out their natural lives with me, safe and well.
Posted by JayWontdart at 10:06 PM