I've had a marvellous day today!  "Hey Jordan, what made your day so "marvellous"?"  Why, thank you for asking, oh mysterious readers voice!  Well, I had my ammo tins arrive, to be ground back and stencilled for INVSOC, carrying pamphlets and what have you, and I got a parcel from Peaceful Prairie!

After learning how sanctuaries dealt with birds eggs, I too have given them back to the Chickens, as a form of population control, plus they enjoy eating their eggs, as nature intended:


I like that Peaceful Prairie promotes *Veganism*, not "free range", not slaughterhouses "designed by autistic savants", not "cage free".  They promote *veganism*. 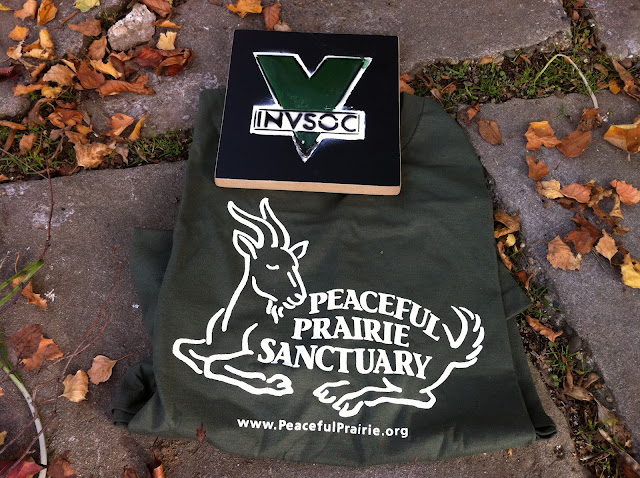 My latest stencil is much better!  With one of the T shirts from Peaceful Prairie
New Zealand group SAFE, who promote Welfare reforms have spoken out against "colony cages".
The groups latest release mentions Director Hans Kriek and Campaigns Officer Sacha Dowell visiting a "Colony Cage" system
In short, they do not like what they see, with these "Colony Cages", which are promoted by industry as being "better welfare!" and "real humane!" (not actual quotes)
SAFE's release ends:
"It would have been clear to the egg industry that NAWAC could no longer avoid phasing out the standard cages as they are in breach of our animal welfare legislation. Bringing in these so called ‘improved' cages is nothing but a ploy by the egg industry to avoid having legislation forced upon them that would ban the caging of hens in favour of free range or barn systems. They may be shooting themselves in the foot though. Spending millions of dollars on yet another cage system that will be rejected as cruel by consumers may cost the industry dearly. If they are hoping that consumers continue to be apathetic to the plight of battery hens and continue to buy their cheap battery eggs they will be sorely mistaken. Growing awareness means that consumers will be increasingly shifting away from cage eggs. SAFE will be at the forefront of growing that awareness and we will not stop until the last hen is liberated from her cage."

Well, we at the Invercargill Vegan Society, who have had a "proper domain" less than 24 hours disagree with SAFE's promotion of "Cage Free" eggs as The True "High Welfare" Choice.  If I may speak on behalf of our whole organisation (and I apparently can),
we see "Cage Free" as another meaningless term, which serves not to help other animals, but to help human animals, the term serves to sooth our consciences about the suffering of others, far far away, out of sight, and soon to be out of mind.

From SAFE's latest release, comparing the"standard cage" (why they dont reuse their term "Battery Cage" for this comparison, I dont know) with the newly proposed "colony cage": 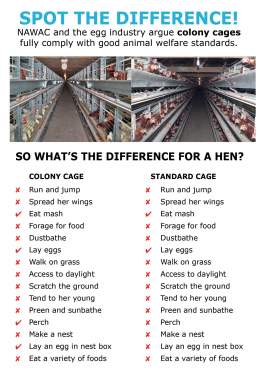 Presumably, since SAFE supports "Cage Free", *that* system of locking up Hens and killing Roosters DOES allow such marvellous welfare benefits as "[scratching] the ground" and "[spreading] her wings".

I rather like the rather fetching Peaceful Prairie shirts that arrived today, I'm sure I'll win "Best Dressed Dictator Of A Single Member Vegan Society" for 2011, the second year in a row, woohoo!
Attractive logos aside, Peaceful Prairie also provide an explanation of why "Free Range", in this case called "Cage Free" by SAFE is *NOT* acceptable:


"First, I would not want anyone to buy "Cage-Free" eggs if they are doing so because they have compassion for the animals and convince themselves that they have made a humane choice.
One of the most destructive things we can do for the animals is to lie to ourselves, or allow ourselves to be fooled an misinformed into believing that animal agriculture of ANY kind is humane.
Second, the so called "Cage-Free" or "Free-Range" eggs are produced with an exorbitant profit margin in comparison to battery produced eggs. Therefore, well meaning consumers will be unwittingly padding the already thick pockets of egg producers, hatcheries, and poultry slaughterhouses, which will only allow them to increase the size of their operations and advertising budgets, which will in turn lead to even more suffering.
Third, the question forgets the most obvious choice: Don't buy eggs at all. Once people allow themselves to entertain the possibility of living egg-free, it's quite empowering. They suddenly realize that Yes! It can be done. Millions of people before them have cut eggs and products made with eggs out of their lives and are doing just fine! Not only vegans, but millions of people from other cultures don't eat eggs."
http://www.peacefulprairie.org/freerange1.html
I'm glad to support a >1 member organisation who promotes Veganism.
We at the Invercargill Vegan Society promote the "Chicken Friend" system of life continuation, where we respect others right to live, treat them as we ourselves would like to be treated, to be friends.
"Battery Cages", "Colony Cages"/"Enriched Cages", "Free Range"/"No Cages" : its all the same, suffering and torture, being treated as property, which is *not* the same as BEING TREATED PROPERLY! :-)

"...do not allow hens to express their normal behaviour, something that is required by law."
Oh yeah?  How about "expressing normal behaviour", such as, oh, I dont know, living a natural lifespan?  Without being treated as a slave, as property?  Without being killed on someone elses whim, when you become "less profitable" for your master?   That sounds good to me!

Lets promote *VEGANISM*, its doubleplusgood, and its the least other animals deserve.  Not to be seen as a "thing", to be treated as an "it", but to be acknowledged as our friends. 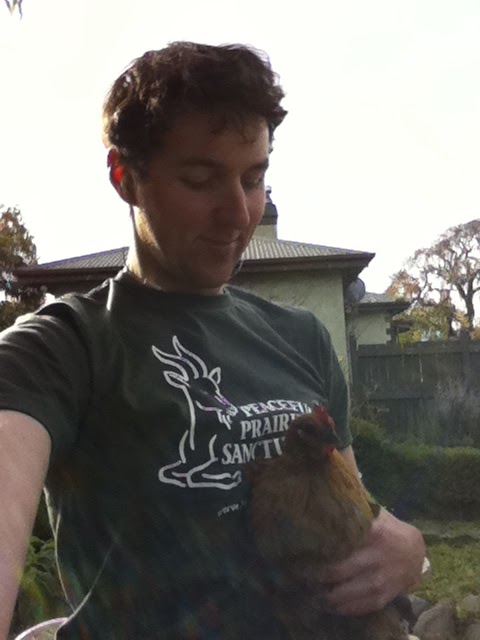 Posted by JayWontdart at 5:04 PM