The Southland Times editor recently wrote about ending "battery cages".  Notice the number of "egg producers", meaning the 47 different farms in all of New Zealand, and NOT the actual female Hens who PRODUCE their EGGS inside their bodies! :-)  They're just "livestock" you know, thousands of birds at each farm, property of "THE Egg Producer" :-) 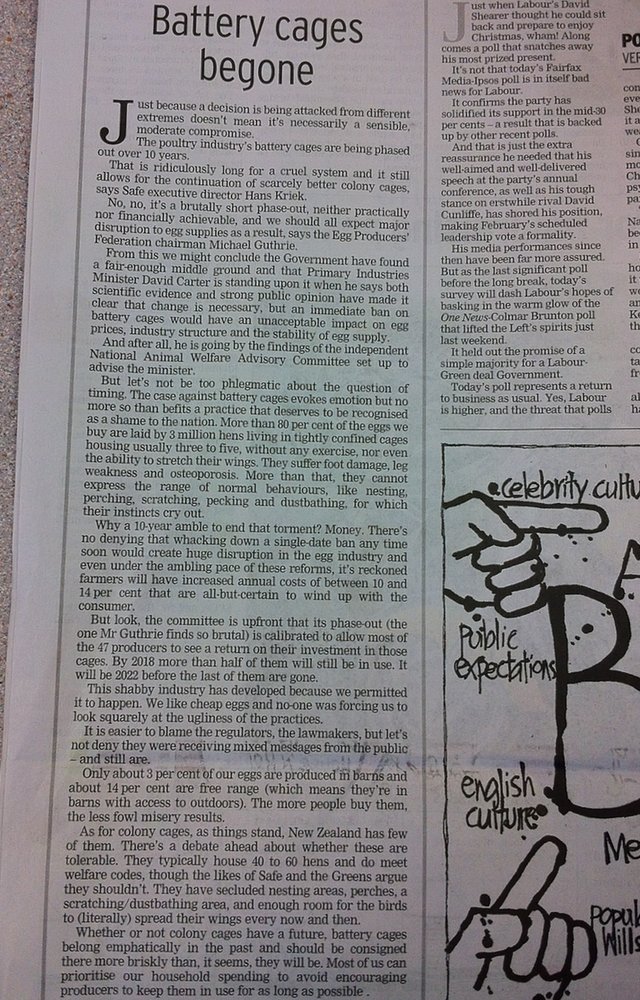 My friend Jenny ALSO had a letter published in the newspaper, about being Vegan for christmas: 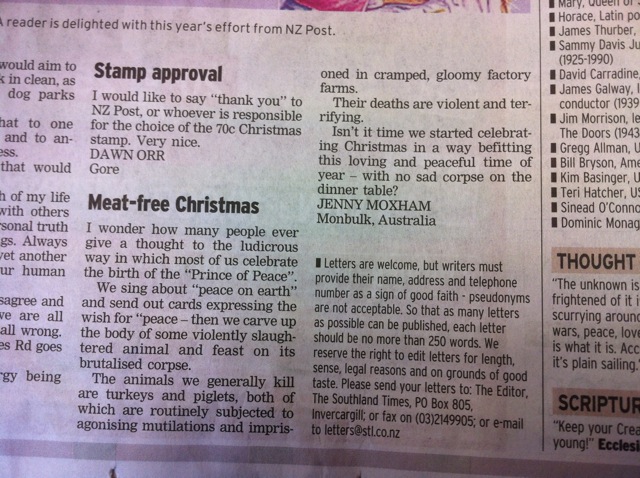 Seizing the chance, I wrote a reply to the editor, taking issue with the mention of  "47 egg producers" 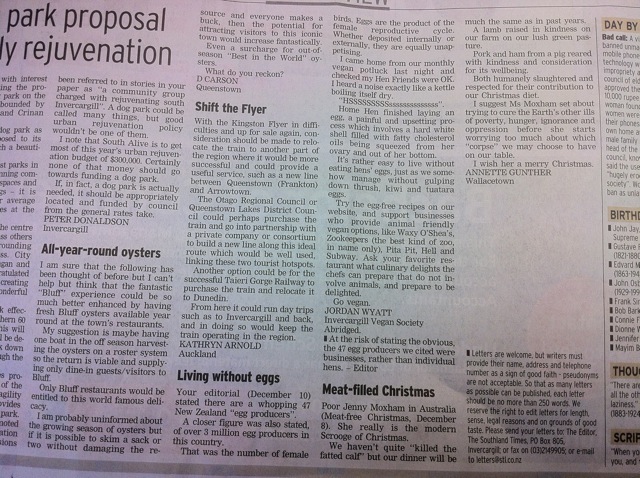 Notice also the "Meat-filled Christmas" reply to Jennys letter.   "Humane Killing", two words which cancel one another out.  Euthanasia, certainly, but killing someone healthy because we want to eat their body as part of a religious tradition?  No thank you.

I've written a reply to Annette, informing her of the wonderful Vegan meals that are possible, sharing details of and a link to our Invercargill Vegan Society potlucks as example.


My letter was abridged, my best jokes were taken out! :-)  I wished the our friends the Guyton family well, three Guyton Jr's, and each graduated top of their year, well done!

My full letter, bold text was removed from the printed selection:

"Yesterday's editorial stated there are a whopping 47 New Zealand "egg producers".  A closer figure was also stated, of over 3 million egg producers in this country, female birds.

The lions share treated as batteries, linked together in parallel fashion, wire above and below.

Hen Friends are A+, not AA.  If you confuse the two, expect a lack of electrical power for your cordless toaster, and a sharp nip to your fingers.

Eggs are the product of the female reproductive cycle.  Whether deposited internally or externally, they are equally unappetizing.

I came home from our monthly vegan potluck last night and checked my Hen Friends were ok.  I heard a noise exactly like a kettle boiling itself dry.  Obviously the correct batteries had been been installed!

"HSSSSSSSSSsssssssssssssssssssss".  Home Hen finished laying an egg, a painful and upsetting process which involves a hard white shell filled with fatty cholesterol oils being squeezed from her ovary and out of her bottom.

It's rather easy to live without eating Hens eggs, just as we somehow manage without gulping down Thrush, Kiwi and Tuatara eggs :-)

Try the egg free recipes on our website, and support businesses who provide animal friendly Vegan options, like Waxy O'shea's, Zookeepers (the best kind of zoo, in name only), Pita Pit, Hell and Subway.  Ask your favorite restaurant what culinary delights the chefs can prepare that do not involve animals, and prepare to be delighted.

P.S Well done Guyton family on your achievements, this letter is about respecting Hens, but Dux should be congratulated too!"

About the abridged note

""At the risk of stating the obvious, the 47 egg producers we cited were businesses, rather than individual hens - Editor"

Theres nothing "obvious" about the millions of Hens in New Zealand, 3 million being the figure stated.  These Hens are the true "producers" of eggs, the eggs entirely belong to the birds, they come from inside their ovaries, they pass through their bottoms, they are Hens eggs, not "humans eggs" :-)

I've written a second letter, trying to be fit in the ~200 maximum word limit.  Given more space, I'd mention that "Egg Farmers" are no golden goose, they produce no eggs themselves, caring only for pooping out gold, taking our money" etc.

Lets see if my second letter is included tomorrow :-)

"What animal products at the supermarket show how they are actually "made"? Cheerful cows, peaceful pigs and happy hens are shown, the last often surrounded by her chicks!


The lions share seen as batteries, Hens are linked together in parallel fashion, wire above and below.

Hen Friends are A+, not AA.

She'll never have been "allowed to keep" her eggs, and a laying hen will never see daylight, much less a male bird in her man made miserable life.

Jenny Moxham has a great suggestion for Annette Gunther - try a Vegan holiday feast :-). The religious reason for the season is to celebrate life, correct? So why horrifically kill and butcher other animals?

Do you care for Cats and Dogs? Are they possessions to fence and cage, an "it", or do you respect and recognize them as a "he" or "she"? A member of the family, or an ingredient in the feast?

The Invercargill Vegan Society is having an animal friendly celebration, similar to our monthy potlucks