A recent issue of the Southland Express featured the winner of the World of Wearable Arts "Bizarre Bra" category: "Lunar Duo".  Two killed, preserved possums placed, joined together with rubber from a car tyre.  This is meant to be a dark joke about how Possums are run over by cars, but is it creative fashion?

I helped a friend with her WOW Bizarre Bra, all the while keeping my KILLER idea to myself.  You'll see a mockup at the bottom of this blogpost... :-)

Apologies to Australian readers, who love their native Possum friends.  We New Zealanders foolishly "introduced" Possums to our country, to kill for their fur....and they've proceded to chew through every native New Zealand tree they could, as well as possibly spreading disease to our precious "dairy" industry cows. 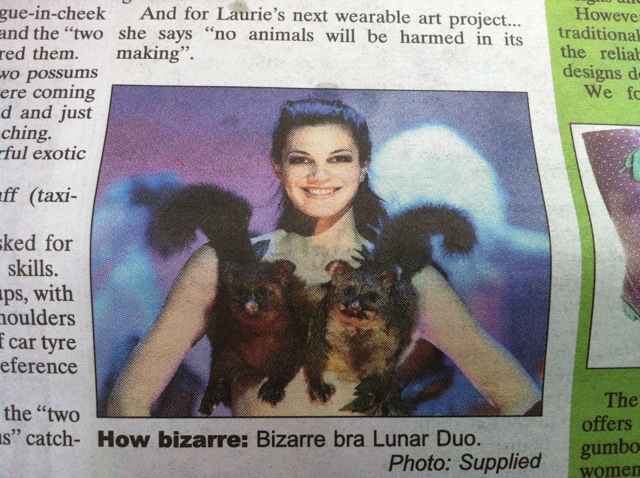 Theres a bizarre disconect in New Zealand, where we're told that possums (which WE brought here deliberately, to kill them as an industry!) are some kind of EVIL animal : "notorious invaders", "plague proportions", "stripping native forests and carrying disease"....pictures hissing and trying to scratch your eyes out!

This historical sign on top of Bluff Hill really can't help itself, "unwanted immigrants" who were DELIBERATELY set loose here!!!  Its not like they swam over from Australia, we *WANTED* them, in the past tense, in a lack of common sense. 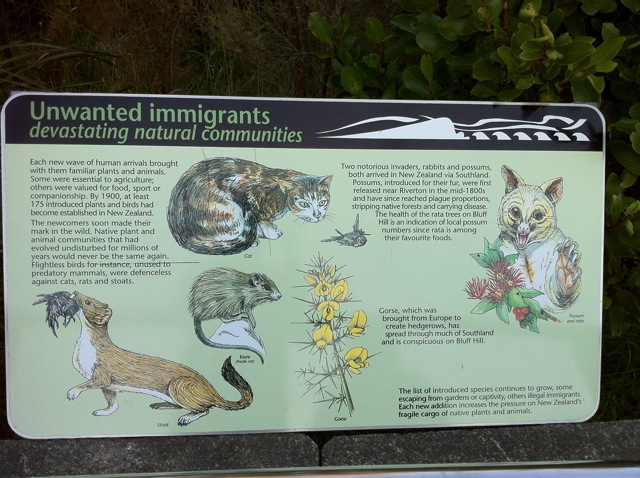 Imagine if this bra featured two ran over CATS!  There would be outrage, tears and anger!  Talk of introducing "the death penalty"!  Possums are really no different from cats, small furry animals who are great at climbing trees and see in the dark.  If anything, possums are actually less harmful in being somewhat "vegetarian".

In their native land, Australia, the possum is beloved, they are actually protected!  The next country over though, we New Zealanders are told to HATE the "pests"!  We actually love the idea of killing them, and consider this bra made from their preserved corpses "funny"! 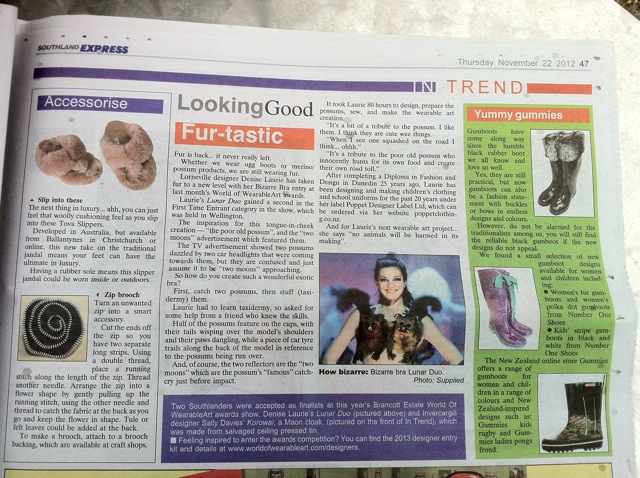 "No animals will be harmed" in the artists next project: 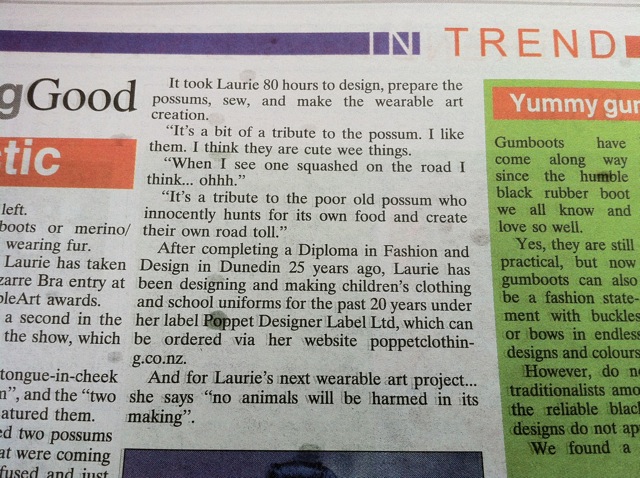 Well!  I think I can one-up this "Bizarre Bra", and do it in an animal friendly way too!

As a Vegan, I do not like the idea of wearing someone elses skin, "leather".  While professional use of animal skin is waning, we're still wearing preserved animals as "fashion".

You may happen to know that my favourite musician is Michael Jackson.  For a long time now, I've wanted a high quality non animal skin version of his Thriller jacket :-)  While MJ was a dietary "vegetarian" at the time of Thriller, the biggest album in the world, he obviously wore animal skin.  He was not Vegan, but this creation of mine wil be :-)

Presenting to you a future entry idea for the Wearable Arts "Bizarre Bra" section: a Thriller jacket made from preserved orange peel! 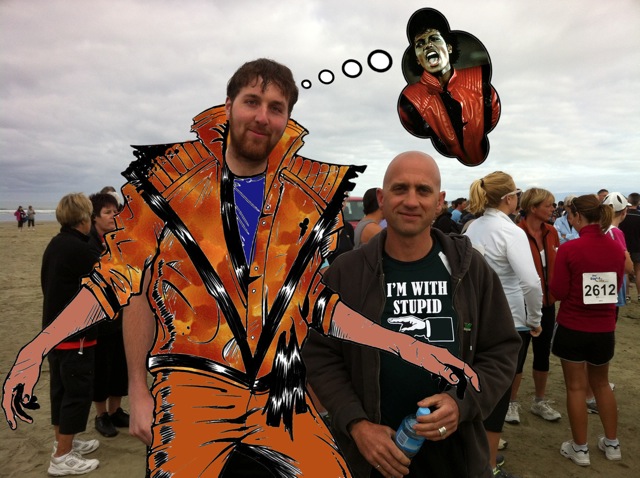 Now, a small minority of people (Russell apparently included) will think this is a stupid idea, "you're going to dry out a whole bunch of carefully removed orange skins?  And then sew them over top of a cheap, thin jacket as an outer shell, having dyed some black for the distinctive lines?  Thats STUPID!  And its not even a freaking BRA, you're entering some preserved orange skin JACKET based on a 1980's music video into the BRA section!!!!"

Lucky for the gene pool, these people are few and far between.

Lets face it: a Thriller jacket?  The most haute of all couture!  Why, I'd win by default, for all eternity!  They'd just give me the Wearable Arts "Bizarre Bra" trophy engraved with "Jordan Wyatt, 2013 to infinity and beyond"!  What could possibly beat a Thriller jacket made from oranges?

Look at the undeniable logic:
* "Yellow Jackets" are an American term for "wasp".  This would be an "orange" Jacket - literally! :-)  Orange skin sort of resembles the pitted texture of skin.
* Fruit is squeezed out into dried treats, called "fruit leathers".  All New Zealand 90's kids will remember  the "roll up" :-)

* Thriller is the greatest music video ever made, and will remain so in perpetuity.  Don't you DARE mention that infernal "Gangnam Style" video in the same sentence as Thriller!

"Ooh, look at me, I'm Psy, a pudgy South Korean in dark sunglasses whose only hit has "G-A-N-G" in the title!  Oh yeah?  Well MJ not only lead his gang of zombies to beat up his date, Chris Brown/Ike Turner style, proved himself quite capable of ending gang violence in "Beat It" and THEN later leading yet another gang of dancers in "Bad" (including Wesley Snipes, a Japanese guy in a Japanese bandanna and a dude with freaking rollerskates!)

* Thriller is the best album of all time, not only in terms of musical genius but in raw sales figures, well over a hundred million copies sold!!!  Its gonna take a hell of a lot better than Justin Bieber or whoever the kids are listening to these days to top that!
* Whole Hen (on my leg, Curious Hen on ground) proves that a marmalade like patchwork of orange can be gorgeous :-) 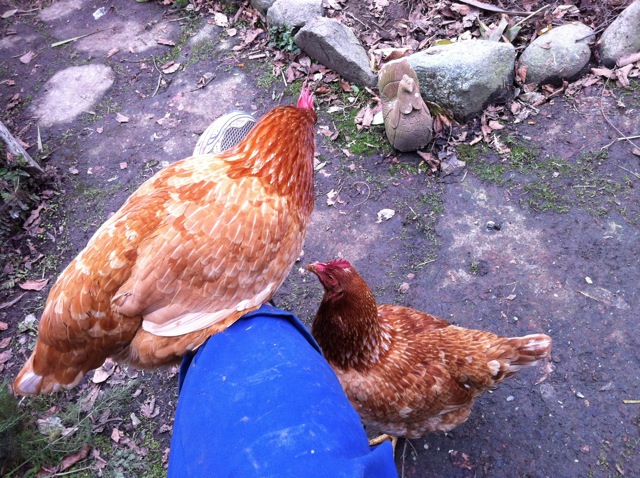 Usually I'm accused of committing "fashion crimes", well, in this jacket made of dried orange skins, I'd be one heck of a "smooth criminal" :-)

With this jacket, the World of Wearable Arts "Bizarre Bra" award is mine!
Posted by JayWontdart at 12:28 AM