As covered previously - Killing ducks is "Man Christmas" - its once again "Duck Shooting season", where (stereotypically) men go out shooting nice little birds to death, while (stereotypically) their wives wait for them to come home/go out and get boozed up themselves with their friends, perhaps during a promotional "Duck Shooters Wives" sales event at local stores.

There are exceptions, women who go out killing these birds too, but generally, as seen in the first link, its portrayed as "Man Christmas", a male event.

The promotion of killing birds blares at you, from newspaper stories about all the recent spates of "hunters" shooting each other, and  of marine animal killing boats finding themselves in trouble, to the "opening weekend" having supermarkets using this great event as a promotional theme : 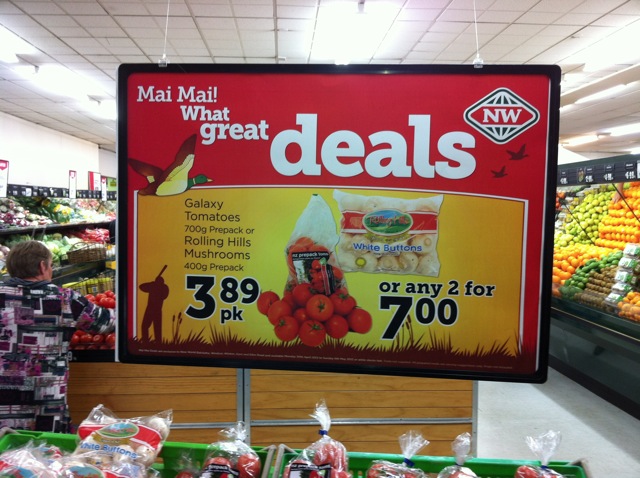 ("maimai's" are a New Zealand term for "hunting blinds", mostly tin sheds with comfortable chairs etc for the brave hunters to occupy while they shoot at birds)  I think they took the "hunter pointing rifle skywards" clipart from a Baseball game series, the guy with his bat cocked back! ;-)

While shopping for tomatoes and red onions I heard supermarket instore ads based on savings, with quacking duck sound effects followed by guns being shot after each special.

Another example, this weekends Southern Express, a free community newspaper : My Rescued Hen Friends didnt leave their mark of disapproval on the paper, but never the less, the "duck shooters" may have escaped their wives for the weekend, but they've been well and truly "hen pecked" as my Hen Friends investigated the newspaper.  They'd never seen one before, being modern birds living in 2012, keeping up to date with the news on their iPad :-) 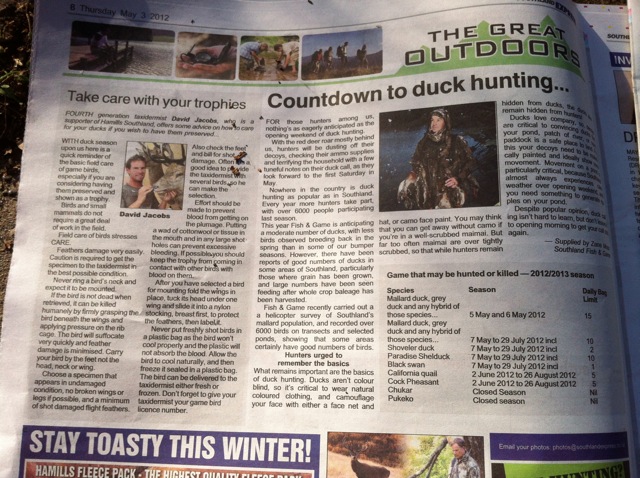 The actual text of these adver-torials is quite shocking, on the left how to have your most prized kills preserved, showing what a great man you are, able to shoot small defenceless harmless birds to death.  And when you come across them and all your shooting hasnt actually killed them yet, why, then you simply crush their lungs with your hands - being careful not to damage the feathers of course, you dont want to damage your trophy!!!!  On the right, a description of how ducks behave, how they "...are'nt colour blind, so its critical to wear natural coloured clothing and camouflage your face with either a face net and hat or camo face paint."  An odd thing to assume, that "those dumb birds" wouldnt be able to see colour like we superior eye'd humans - I would have written "...like us, ducks can fully see colour, they notice changes in their environment quickly with their keen sight."

Also, another gem "Ducks love company...", of how to put out floating decoy ducks outside your maimai, your hunting area so it seems like other ducks have landed, like all is safe, safety in numbers....before we humans shoot them to death.

I look forward to a world where supermarkets cease promoting "flesh weak" and bird killing as a masculine activity, where we are instead informed of the specials for tofu and soy ice cream, with bird song inbetween.

Posted by JayWontdart at 9:38 PM